Plans for fans to return for iconic Melbourne sports events 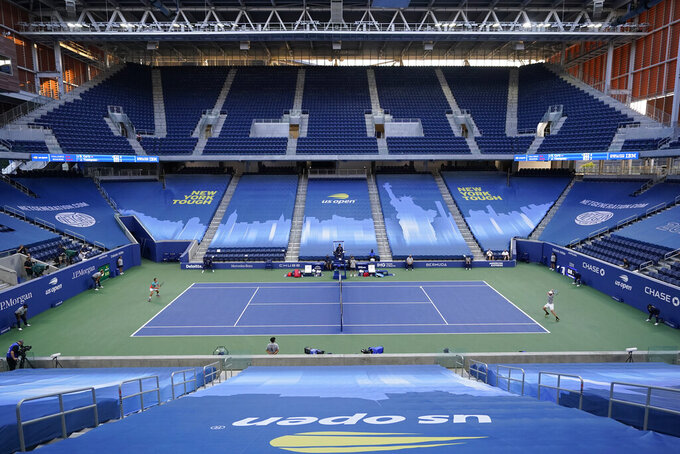 Jordan Thompson, right, of Australia, plays against Borna Coric, of Croatia, during the fourth round of the US Open tennis championships, Sunday, Sept. 6, 2020, in New York. (AP Photo/Frank Franklin II)

MELBOURNE, Australia (AP) — Government officials are aiming to have crowds back at sports events in Melbourne in time for the Boxing Day cricket test between Australia and India in December and for the first tennis major of 2021 at the Australian Open.

Victoria state Premier Daniel Andrews on Monday said his government was in detailed negotiations with tennis and cricket administrators to find a way to have spectators attending two of Melbourne’s iconic sports events just before and just after the new year.

“We just have to work out what a safe crowd would be. It is too hard to say now what that number is,” Andrews said during a daily news briefing. “It is too early for us to determine how big any crowd might be.

“We will get as many people we can get there, provided it is safe.”

Total crowds at Melbourne Park for the Australian Open hit a record 812,174 in January, despite the wildfire crisis in southeast Australia earlier in the month.

Tennis Australia chief executive Craig Tiley has said the Australian Open won't be staged anywhere outside of Melbourne, and there are contingencies to allow for smaller capacities for spectators for the Jan. 18-31 event.

The just completed U.S. Open didn't allow any fans to attend during the tournament.

Melbourne prides itself on being one of the world's sporting capitals. But a six-week lockdown and night curfew in Victoria state because of a second wave of COVID-19 infections has already forced the top-flight Australian rules Grand Final to be relocated out of the Melbourne area for the first time ever.

It'll be held Oct. 24 in Brisbane, Queensland state, where crowds are allowed into sports venues and where Melbourne's AFL clubs have been based in recent weeks.

Australia shut its international borders and went into lockdown soon after the Formula One Australian Grand Prix was canceled two days ahead of the scheduled season-opening race in March, with all teams already in Melbourne. That was only a week after more than 86,000 people attended the Melbourne Cricket Ground to watch Australia beat India in the Women's Twenty20 World Cup final.

The country emerged from the initial lockdown with a relatively low toll but surging cases and deaths in Victoria forced Andrews to put his state back into a high-level lockdown last month. Restrictions are expected to ease by Sept. 28.

Victoria accounts for 729 of Australia's 816 deaths from COVID-19 and almost 20,000 of the country's more than 26,500 infections, according to a count by Johns Hopkins University.

But there's been wide speculation Cricket Australia may have to relocate the match during the four-test series against India, with the Adelaide Oval considered a front-runner among the potential replacements because it has accommodation and match facilities easily able to be contained inside a bio-security bubble. The Australian men's team is in England now playing in a limited-overs cricket series being staged under strict isolation and with no fans.

Andrews said he wanted to have fans returning to watch sports again in Melbourne, although he was cautious.

“We don’t want one event to necessarily set us back and cause us a problem," he said. “”It is hard for us to predict where virus numbers will be, what risks do we have to deal with in just a few weeks time, let alone months.