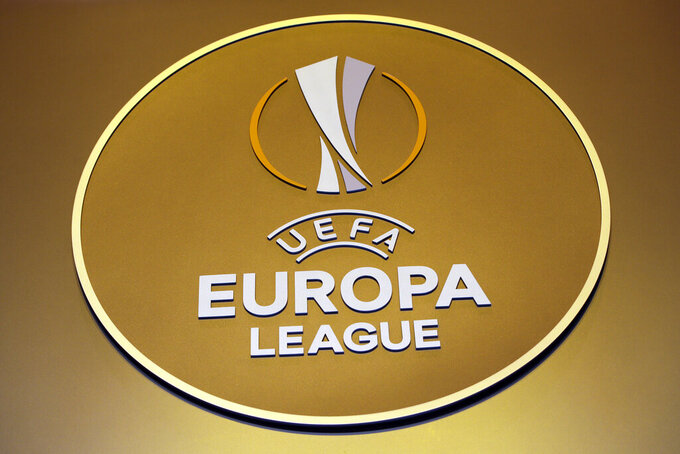 FILE - In this Friday, Aug. 31, 2018 file photo, the logo of the UEFA Europa League is displayed before the draw ceremony at the Grimaldi Forum, in Monaco. A player testing positive for COVID-19 forced a Europa League preliminary game to be postponed Thursday, Aug. 20, 2020. Its the fourth such incident in the early qualifying rounds for UEFA’s club competitions that run through September and involve teams from 55 countries. (AP Photo/Claude Paris, file)

GENEVA (AP) — A player testing positive for COVID-19 forced a Europa League preliminary game to be postponed Thursday — the fourth such incident in the early qualifying rounds for UEFA’s club competitions.

All four affected games involved positive tests within visiting teams — three from Kosovo — whose cases were dealt with by local public authorities in Switzerland, Gibraltar, the Faroe Islands and San Marino. One game last week was forfeited by Kosovo's champion Drita.

San Marino club Tre Penne said a player from its opponent, Gjilani of Kosovo, tested positive ahead of Thursday's game,

“The player is now isolating in quarantine in the hotel where the team are staying,” Tre Penne said in a statement, later adding UEFA rescheduled the game for Friday.

According to UEFA’s new competition rules during the pandemic, Gjilani would have to play the game by a Saturday deadline or forfeit it as a 3-0 loss.

All three teams from Kosovo — Drita, Prishtina and Gjilani — entering this season’s Champions League or Europa League have had games forfeited or postponed in just a 10-day spell.

A fourth team, Slovan Bratislava of Slovakia, was prevented from playing Wednesday in the Faroe Islands.

Slovan was flying replacement players to the islands to fulfil the Champions League first qualifying round game on Friday against KI Klaksvik.

UEFA requires teams to play if they can select from 13 healthy players, including one specialist goalkeeper, which have passed local authority tests. Late registration of players can exceptionally be allowed.

Problems were anticipated in the tightly scheduled Champions League and Europa League qualifying rounds, where games in empty stadiums are mostly organized at a few days’ notice.

They involve teams from 55 UEFA member federations traveling around Europe through September. Teams from high-ranked soccer leagues do not enter until next month.

Teams are playing for up to 480,000 euros ($570,000) UEFA prize money in each early qualifying round, and can get more for travel costs. Champions League finalists Bayern Munich and Paris Saint-Germain each get around 100 million euros ($120 million) from UEFA.

UEFA has allowed teams to stage qualifying games in their home stadium, or go to a neutral country if national travel restrictions are imposed.

Health protocols for games that UEFA organizes require players to be tested before matches. However, positive cases are managed by local health and public authorities applying varying standards amid virus outbreaks at different levels.

Last week, Drita had two players test positive, and a third self-isolated, before being effectively sent home from Switzerland by authorities in UEFA’s home canton (state) instead of entering 10-day quarantine.

Drita forfeited its game against Linfield of Northern Ireland. It was to complete a four-team mini-tournament that decided the final entry in the Champions League first qualifying round.

On returning to Kosovo, Drita said on social media “we are deeply indignant at this sudden and subjective decision” and would consider legal action.

Linfield advanced to play a single-leg knockout game in Poland against Legia Warsaw.