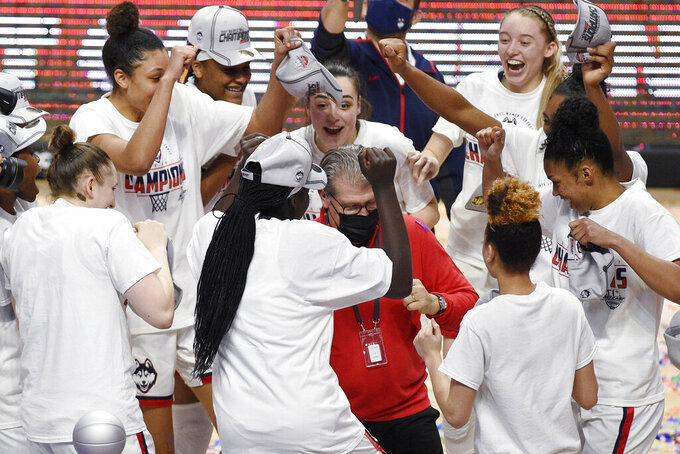 “I mean, not even close,” the Belmont coach said. "There’s not even a close second.”

COVID-19 shut down his program after Belmont routed Auburn on the road on Dec. 20. Between the positive tests and contract tracing, the Bruins worried they might not finish a promising season with two canceled games and nine others postponed.

That’s why just making the NCAA Tournament this season already feels like a big win — and not just for Belmont. Though the journey is not over, teams recognize their dreams can still be derailed by the virus.

Each of the 64 teams in this year's bracket — plus the four on stand-by — had their season affected by COVID-19 in one way or another. The luckiest were just inconvenienced by a game canceled or rescheduled due to an opponent's positive test results or tracing issues.

Brooks checked in on his sick players in isolation via Zoom video chats.

“It was miserable,” Brooks said. “It was absolutely horrible as a coach that you didn’t feel like you can help them. There was nothing we could do. And it felt at the time there’s no end in sight.”

It's been a season of survive and advance just to get the Texas with all the stops, pauses and re-starts across basketball.

Duke, Virginia and Vanderbilt were among the teams that decided to stop trying to play through the coronavirus pandemic and simply ended their seasons.

But Baylor had only one cancellation Jan. 7 against UConn after coach Kim Mulkey tested positive.

Bradley and High Point, both making their NCAA Tournament debuts, and FGCU are three of four teams nationally to play 28 games. Winners of 25 straight, FGCU still went through a two-week pause and two postponements.

On the other side of the coin, there’s Lehigh and UC Davis — teams that played only 15 games apiece. UC Davis had 13 straight games canceled, including one with perennial power Stanford. MEAC champ North Carolina A&T has played 16, while Oregon State had 11 postponed.

Organizers are exploring every option to keep everyone safe enough to play. Middle Tennessee split 29 people among three 56-passenger buses for the trip to San Antonio from Dallas where the Lady Raiders won the Conference USA Tournament. Players and coaches will be wearing devices to remind them to stay 6 feet apart.

There is probably no team in the tourney more familiar with taking extreme measures to stay healthy in order to play than Pac-12 champion Stanford. The Cardinal spent more than two months away from campus playing and practicing given COVID-19 protocols in that area prohibited sporting events and practices.

"It is a definite reminder to everyone, it’s like, ‘stay away,'" Hall of Fame Stanford coach Tara VanDerveer said when asked about Auriemma’s situation. "Our whole staff and team we’ve worked really hard and we want to stay negative through this tournament and keep playing.”

To ensure they would be healthy enough to play in the NCAA Tournament, Missouri State withdrew from the Missouri Valley Conference Tournament semifinal last weekend after eventual champ Bradley had a positive test within its program.

Middle Tennessee went through two pauses that had coach Rick Insell worried if his Lady Raiders would play the 13 games necessary to be considered for the NCAA Tournament.

“We didn’t really care what happened through that span of days and games as long as we got a game in,” Insell said. “And then as we got to getting in 11, 12, and it looked like we were going to be able to get to 13 games in, ... maybe we should have done a little better job in those games.”

The Bruins worried about playing enough games to even make it the Ohio Valley Conference Tournament. Junior guard Maddie Cook said the players not in isolation or quarantine talked in circles when not working hard to be ready.

Belmont played several games with the minimum of eight players, including in four of the Bruins' five losses. The Bruins, like many other teams busy making up games, played so much that walk-throughs or shootarounds replaced practices for long stretches.

“It was difficult physically, mentally," Cook said. "We were thinking, ‘OK we might play tomorrow.’ And then an hour later, the game was canceled. ... But we're here now, and it feels amazing.”

UCLA coach Cori Close said she's grateful the conferences and the NCAA figured out how to hold this tournament and is ready to go.

But Tennessee coach Kellie Harper, who dealt with two pauses this season, said they're not quite at the finish line just yet. She'll keep checking her phone daily for updated test results.

“Until we get all the way to game day," Harper said, “I’ll be nervous every day."

For the women’s tourney: