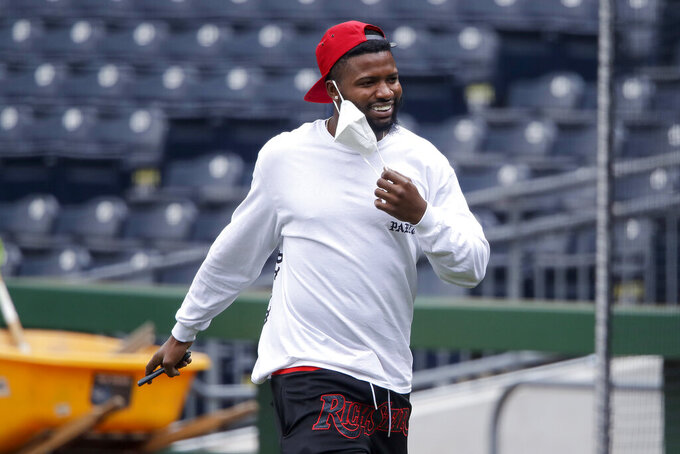 PITTSBURGH (AP) — The tools are there. They always have been from the moment Gregory Polanco crashed into the big leagues six years ago as a raw jangly mix of power and potential.

The looping swing that can occasionally send baseballs to the banks of the Allegheny River that flows beyond the right-field stands at PNC Park. The long stride that makes it seem like he can get from first to second in a handful of steps. For six seasons the 28-year-old right fielder has tantalized, to the point where the Pirates signed him to a contract extension in 2016 that could be worth $35 million through 2023 if the club chooses to hold on to him.

An “if” Polanco is well aware of. When the Pirates traded center fielder Starling Marte in January, it left Polanco as the last member of the group that led the Pirates to three straight playoff appearances from 2013-15. Polanco wants to be a part of the group that returns the club to contention. Yet he might be just as valuable as a trade chip for an organization in transition, one whose new leadership group talks constantly about the need for younger (and ultimately cheaper) talent.

Either scenario requires Polanco to start delivering with consistency.

He seemed to be on his way in 2018 when he hit 23 homers and drove in 81 runs before a comically exaggerated slide into second base in September against Cincinnati. Polanco's long legs went airborne as he tried to extend toward the base and when they landed he ended up tumbling forward, dislocating his left shoulder and tearing the labrum in the process. He endured a lengthy rehab and returned for 42 games in 2019, but his throwing arm was never right and he was shut down in late June.

He has been a rumor for much of the last year. Teammates raved about what they saw during spring training in March, and he hit .381 in nine games before the season went on hiatus due to the coronavirus. He spent much of the shutdown in Miami working out with his trainer and fine-tuning the movements that have troubled him in the past.

He knows teams will challenge his rebuilt left arm defensively. Yet he feels much better than he did in 2019, when the second baseman would sometimes seem to run halfway out to the Clemente Wall in right field to shorten the throws Polanco was required to make.

The Pirates could decide to use him more at designated hitter, but he'd prefer to be in the field. He didn't overhaul his throwing motion and spend the better part of two years figuring out how to let it loose pain-free to just stay in the dugout and watch.

“I don’t like DH-ing, but at the same time, you’ve got to be smart,” Polanco said. "For sure we’re going to take advantage of that, and I’m pretty sure I’m going to be DH-ing depending on how I feel, and whenever they need me to DH, I’ll be there.”

If the team that finished last in the NL Central last season before undergoing a massive front office overhaul during the winter wants to put a run together in a season unlike any other, Polanco will need to stay healthy and avoid the extended slumps that have bedeviled him. Only three teams hit fewer home runs than the Pirates last season. Having the 6-foot-5, 235-pound Polanco dig into the batter's box and take aim at the Clemente Wall and the river behind it would give Pittsburgh a significant power boost.

“I think I told you guys at spring training 1.0, his leadership stood out, the way he ran the bases stood out,” first-year manager Derek Shelton said. "He comes in every day with a smile on his face and he’s good to go. I think he’s poised to have a really big year.”

From the day he arrived in Pittsburgh in the spring of 2014, Polanco has flirted with being not just a complementary player but a centerpiece. If it's ever going to happen, it needs to be now. And he knows it.

“I trust me,” he said. "I trust the process and work that I’m putting. I just need to now mature and now I just need to try to put that work I put in the offseason to the season. With my talent, the talent that I have, sure, I can be a star in this league.”