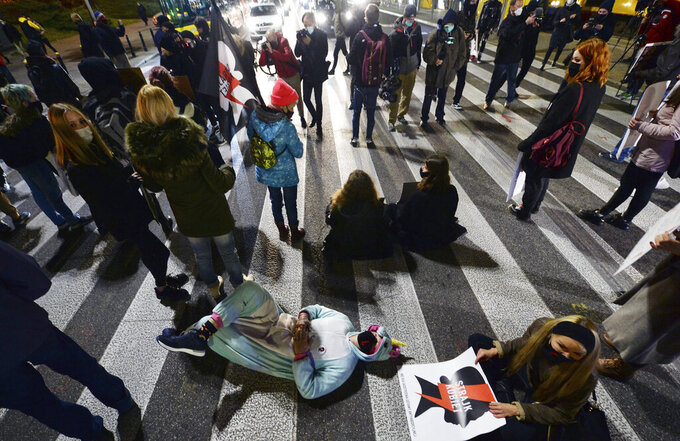 Protesters hold signs reading in Polish "women's strike" as they block a crossing in downtown Warsaw, Monday, Nov. 9, 2020, on the 12th straight day of anti-government protests that were triggered by the tightening of Poland's strict abortion law and are continuing despite a anti-COVID-19 ban on public gatherings. (AP Photo/Czarek Sokolowski)

WARSAW, Poland (AP) — Poland's prime minister appealed Monday for talks with the leaders of massive protests that were triggered by the tightening last month of the nation's strict abortion law and are continuing despite a resurgence of COVID-19.

Just hours before the latest round of nationwide marches began Monday, the head of the right-wing government, Prime Minister Mateusz Morawiecki, made a video appeal to protesters and opposition leaders.

“I ask you to sit down together for talks. May our disputes not be held in the streets and may they not be the cause of more infections,” Morawiecki said.

Morawiecki's appeal didn't stop protesters with signs calling for abortion rights from blocking streets and traffic circles in Warsaw, Poland's capital, and other cities like Krakow, Wroclaw, Gdansk and Bialystok for the 12th straight day.

In Warsaw, the protesting groups converged by the parliament building for a loud but peaceful rally.

Earlier Monday, a leader of the protests said the contested court ruling that unleashed public anger must be withdrawn.

Klementyna Suchanow, leader of the rights organization Women’s Strike, said that more protests will come during the week, despite a ban on public gatherings of more than five people because of the coronavirus pandemic. Poland reported almost 15,780 new cases Monday.

Nationwide protests by hundreds of thousands of people have been held daily since Oct. 22 when a constitutional court barred abortions of fetuses with congenital defects, further narrowing one of Europe’s most restrictive abortion laws in the predominantly Roman Catholic nation.

When it is published and takes effect, the court ruling will mean that an abortion is only permitted in Poland when a pregnancy threatens the mother's health or is the result of crime like rape or incest.

“The ruling by the so-called Constitutional Tribunal must be withdrawn,” Suchanow said, stressing that the legal status of the court itself is being contested.

Critics question the independence of the tribunal after the ruling right-wing Law and Justice party put its loyalists in the court shortly after it took power in 2015. Some say the move was a breach of the law.

Suchanow said that Poland's abortion law needs liberalization, but admitted it may not be possible under the current conservative government, which has a narrow majority in the lower house of parliament.

Support for the ruling party started shrinking even before the abortion ruling. The government’s moves to control the judicial system, a new animal rights law and remarks against LGBT rights by top officials created political divisions and sparked protests.

Some surveys show most people want the party leader and deputy prime minister, Jaroslaw Kaczynski, to step down, especially after he called last week on his supporters to counter the protesters and defend churches against attacks.

Protests were also planned by health care employees who say their sector is poorly organized and has reached its limit in the fight against the coronavirus.