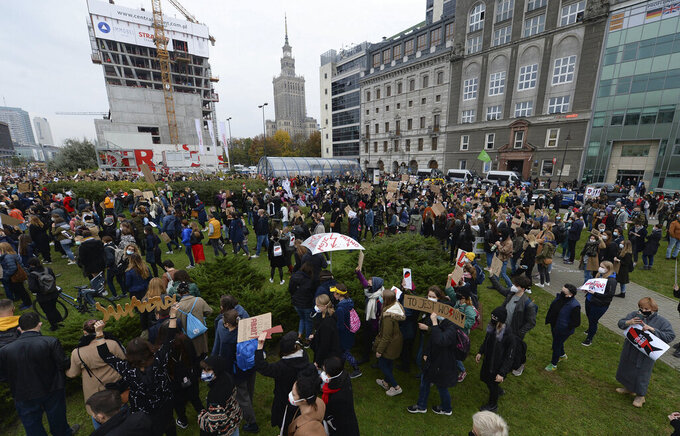 Women's rights activists with posters of the Women's Strike action protest in Warsaw, Poland, Wednesday, Oct. 28, 2020 against recent tightening of Poland's restrictive abortion law. Massive nationwide protests have been held ever since a top court ruled Thursday that abortions due to fetal congenital defects are unconstitutional. (AP Photo/Czarek Sokolowski)

WARSAW, Poland (AP) — People across Poland stayed off their jobs and huge crowds poured onto the streets for a seventh straight day of protests Wednesday, enraged over a top court ruling that bans abortions in cases of fetal abnormalities.

Tens of thousands of people, gathering in defiance of pandemic restrictions, vented their frustration about the abortion ruling and more broadly at perceived restrictions on their freedoms under the right-wing ruling party, Law and Justice.

Protests against last week's court ruling also spread to other countries. People gathered at Poland's embassies in Stockholm, Lisbon and Rome in solidarity with Polish women.

Poland, a mainly Catholic country, already had one of Europe's most restrictive abortion laws. The ruling that declared it unconstitutional to terminate pregnancies for congenital defects amounts to a near-total ban.

In Warsaw on Wednesday, demonstrators marched from the office of Ordo Iuris, a conservative group that has been lobbying for years for a full abortion ban, to the parliament building, which was surrounded by police officers in riot gear. Large crowds also filled the streets in other major cities, including Krakow, Wroclaw, Szczecin and Lodz.

In parliament, Poland’s most powerful politician, ruling party leader Jaroslaw Kaczynski, lashed out at opposition lawmakers, accusing them from the podium of inciting people to protest during the pandemic.

“You are destroying Poland, Kaczynski told them. “You are exposing a lot of people to death, you are criminals.”

The nationwide strike and protests have been largely organized by Women's Strike, a women's rights initiative. They come amid a deepening standoff between angry demonstrators and Poland's deeply conservative government, which pushed for last Thursday's court ruling and has vowed not to back down.

Opinion polls show a majority of Poles oppose the constitutional court's ruling and the protesters have even found support from unexpected groups, including farmers and miners.

Another opinion poll on Wednesday showed falling support for the Law and Justice party.

Rage over the ruling, which would deny legal abortions to women even in cases of fatal birth defects, has been directed at the Roman Catholic Church and ruling party leader Kaczynski.

Kaczynski has said in the past that pregnancies involving even fetuses that are badly damaged and have no chance of survival outside the womb should "still end up in a birth, so that the child can be baptized, buried, have a name.”

Kaczynski accused protesters of seeking “to destroy Poland” late Tuesday and called on his party's supporters to defend churches “at any cost.”

On Wednesday, people heeded that call, gathering outside churches and singing religious songs, in hopes of drowning out the obscenity-filled chants of protesters.

Some saw Kaczynski's words as an incitement to violence. The 71-year-old also holds the job of deputy prime minister in charge of police and security services.

Donald Tusk, a former prime minister and European Union leader who is a harsh critics of Kaczynski, called for the country's current leaders to step back from their confrontation with their people.

The conservative rulers have sought to depict the huge crowds of mostly young people led by women's rights activists as “fascists.”

Interior Minister Mariusz Kaminski on Wednesday vowed “decisive action” by the police “in the face of further attempts of similar acts of aggression and desecration announced by the leaders and organizers of the protests.”

He said 76 people were detained in connection with the protests at churches, and prosecutors are carrying out proceedings in 101 cases.

People have been taking to the streets in massive numbers even as the coronavirus spreads fast, with a record 18,820 new cases and 236 new deaths over the past day.

Polish President Andrzej Duda, who is in isolation after testing positive for COVID-19, said he was saddened by the situation in the country. He said he was pleased last week with the court's ruling but added that he understands the protesting women.

“I am very troubled by this situation,” Duda, who is allied with the ruling party, told Polsat News.