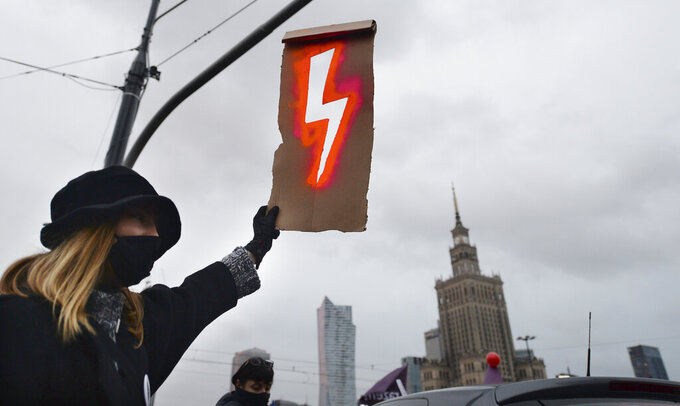 People demonstrate against police violence and an attempted restriction on abortion rights in Warsaw Poland, Saturday, Nov. 28, 2020. Nationwide protests Saturday were scheduled to coincide with Polish women gaining the right to vote 102 years ago. Weeks of protests against a high court's ruling to further restrict Abortion rights have evolved into the largest protest movement since communism fell 30 years ago.(AP Photo/Czarek Sokolowski) 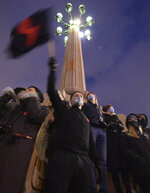 WARSAW, Poland (AP) — Police blocked protesters from marching in Poland's capital as demonstrations took place across the country against an attempt to restrict abortion rights and recent police violence.

Police and protesters played a game of cat and mouse in Warsaw as officers set up cordons which the protesters sought to evade, pushing them to try to regroup elsewhere in the city center.

At one point, protest participants gathered on a major thoroughfare, causing traffic to back up. As drivers honked, the protesters shouted: “We are sorry for the inconvenience, we have a government to overthrow."

Police issued warnings that the demonstration was illegal because it had not been registered ahead of time. It also violated a pandemic-related ban on large gatherings.

“We have a right to protest,” participants chanted.

Officers at one point used tear gas against an opposition lawmaker, Barbara Nowacka, who had been intervening “in defense of peacefully protesting women,” Borys Budka, the head of Poland's centrist Civic Platform party, said.

Protesters in the capital began their demonstration by symbolically “renaming" a downtown square to Women's Rights Roundabout. An activist climbed onto a ladder placed upon a van to hang a new street sign over the official one reading Roman Dmowski Roundabout.

Women's rights activists want authorities to formally approve the name change. They say it would honor a movement for equality rather than Dmowski, a statesman who had a key role in helping Poland regain national independence in 1918, but who was also an anti-Semite.

Protests in Krakow, Gdansk and other cities Saturday were organized to celebrate Polish women gaining the right to vote 102 years ago. The events were planned under the slogan, “In the name of mother, daughter, sister.”

A mother with two teenage daughters in Warsaw held a sign saying, “I am here for my daughters.”

The demonstrations are part of what has evolved into Poland's largest protest movement since communism fell in the country 30 years ago. An Oct. 22 ruling by the Polish constitutional court to ban abortions of fetuses with congenital defects, even when the fetus has no chance of survival at birth, sparked the protests.

Poland already had one of Europe’s most restrictive laws, negotiated in the early 1990s between political and Catholic church leaders whose authority was bolstered by having a Polish pope, John Paul II, at the Vatican. That 27-year-old law allows abortions only in the cases of fetal defects, risk to a woman’s health and incest or rape.

Amid mass protests, the government has not implemented the court ruling, a tactical victory so far for the Women's Strike, the movement that organized the protests that brought hundreds of thousands of people to the streets of hundreds of towns in recent weeks.

Activists seek to keep up the pressure while also demanding a more liberal abortion law and the resignation of the country's right-wing government.

Many carried signs with the movement’s logo, the silhouette of a suffragette with a red lightning bolt and the words “Strajk Kobiet” — or Women’s Strike.

Saturday's protest included calls to end police violence after officers used tear gas and other types of force against protesters earlier this month.