Police: Chicago calming down, but still 'too much violence' 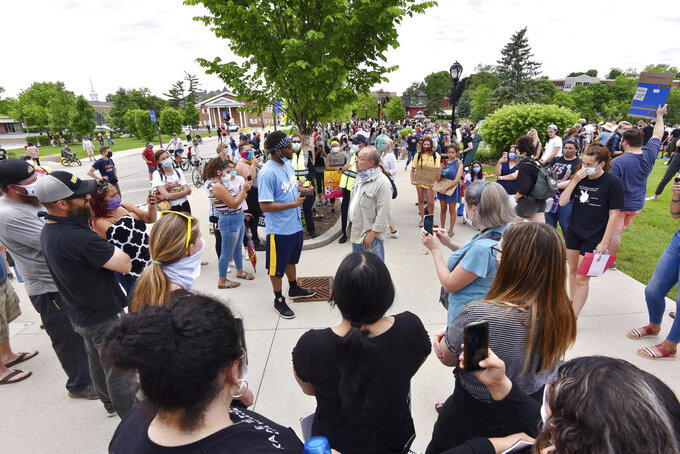 Two men have a discussion at a Black Lives Matter rally at the Peg Bond Pavilion in Batavia, Ill., Wednesday, June 3, 2020, during a protest over the death of George Floyd, a black man who was killed while in police custody in Minneapolis on May 25. (John Starks/Daily Herald via AP)

“I think we are hitting the right tone and strategy as it relates to protecting our neighborhoods from violence while at the same time allowing those who want to express their First Amendment rights to do so in a way that is in keeping with our Constitution," Brown said Wednesday.

Still, Brown said police made 274 arrests on Tuesday and the city continued to experience “too much violence,” including 23 shootings on Tuesday night.

In spasms of violence that were reminiscent of what happened in Chicago during the 1968 Democratic National Convention, the weekend that began with peaceful protest over Floyd's death in Minneapolis devolved on Saturday evening. Vandals smashed scores of business windows, and people climbed through store windows and made off with property, set businesses and cars on fire and clashed with police. The weekend also ended with more than 80 people shot in the city, about 20 of them fatally.

The scenes in Chicago mirrored other cities nationwide, where massive crowds took to the streets in the wake of the death of Floyd, a handcuffed black man who died after a Minneapolis police officer pressed his knee to Floyd’s neck for several minutes.

Despite quieter streets, reports of crime related to the unrest in the city continued, including the arrest of a man on the city's Northwest Side early Monday after he allegedly broke 80 windows of an elementary school with a golf club.

The city reopened after being largely closed down for weeks because of the coronavirus pandemic. As businesses across the city that closed due to the pandemic reopened, many remained closed while crews worked to repair the damage caused by vandals.