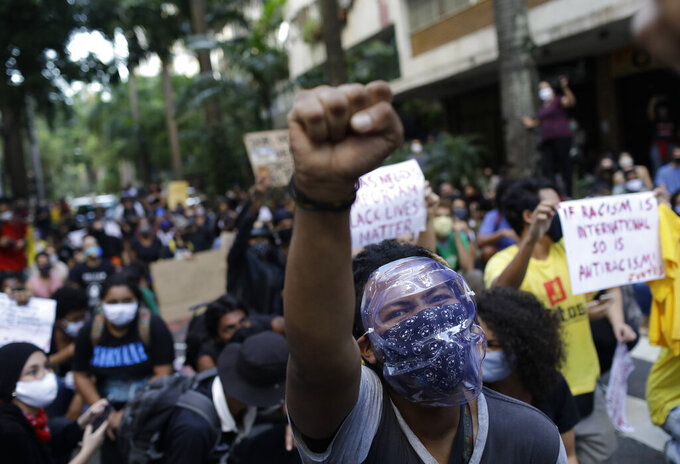 People protest against crimes committed by the police against black people in the favelas, outside the Rio de Janeiro's state government, Brazil, Sunday, May 31, 2020. The protest, called "Black lives matter," was interrupted when police used tear gas to disperse people. "I can't breathe", said some of the demonstrators, alluding to the George Floyd's death. (AP Photo/Silvia Izquierdo)

The demonstration by several hundred black-clad members of football fan groups in Sao Paulo appeared to be the largest anti-Bolsonaro street march in months in a country that has become an epicenter of the spreading COVID-19 pandemic.

Many of the protesters chanted “Democracy!” as they marched.

The executive secretary of the military police, Alvaro Batista Camilo, said police fired gas to keep the groups apart after some Bolsonaro backers carrying what he called a neo-Nazi flag approached the protesters. Supporters of the president have gathered weekly to back the president and his calls for easing restrictions on movement, gatherings and work.

He said police continued aiming largely at the anti-Bolsonaro group because it was slower to disperse.

Police didn't immediately have information about any arrests or injuries.

Police also used tear gas against anti-Bolsonaro demonstrators who clashed with pro-government groups in Rio de Janeiro. Bolsonaro himself turned out to meet backers in the capital, Brasilia, mounted on a federal police horse. He wore no mask despite a decree by the Federal District's government making that practice mandatory in public.

Brazil has reported nearly half a million confirmed cases of COVID-19 and more than 28,000 deaths — figures widely considered understatements due to a lack of adequate testing.

Meanwhile, hundreds of people gathered in front of the Rio de Janeiro state government palace to protest crimes committed by the police against black people in Rio’s working-class neighborhoods, known as favelas.

The protest, called “Black Lives Matter,” was interrupted when police used tear gas to disperse people. “I can’t breathe,” said some of the demonstrators, alluding to George Floyd´s death in Minneapolis.

One recent victim was Joao Pedro Pinto, a 14 year-old black teenager killed during a Federal Police operation in the Complexo Salgueiro, a group of favelas. Joao Pedro was at home with family when officers invaded his house and shot him on May 18th. Pinto was reported as missing, and his family was notified of his death the next day.

Protesters called for an end to police operations inside favelas. They shouted the names of some victims followed by the word “present!”

Rio has one of the most deadly police in Brazil. In 2019 they killed 1,546 people, the highest number since 1998, and much of that was during police operations in favelas.