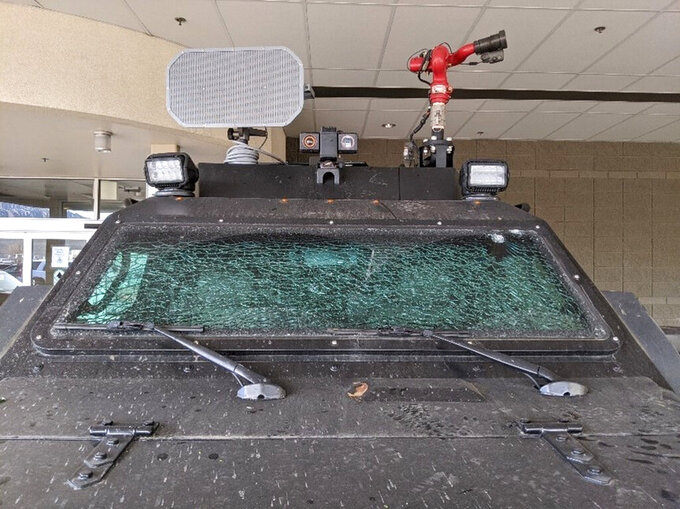 This Sunday, March 7, 2021, photo released by the City of Boulder shows the smashed windshield of a Terradyne light armored patrol vehicle at the Boulder Police Department in Boulder, Colo. Boulder Police confirms three members of their SWAT team were injured with bricks and rocks. They also say their armored rescue vehicle and fire truck sustained heavy damage. Authorities say they will seek criminal charges against participants in a massive party near the University of Colorado that devolved into a violent confrontation with police this weekend. (Boulder Police Department/ City of Boulder via AP) 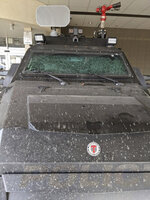 BOULDER, Colo. (AP) — Authorities fielded hundreds of tips Monday as they pursued those responsible for a massive weekend gathering near the University of Colorado at Boulder in which participants damaged cars, set off fireworks and tossed bottles and rocks at police, slightly injuring three officers.

Boulder County health authorities, meanwhile, warned of a possible surge in the coronavirus because of the Saturday night melee in which as many as 800 people, few wearing masks, flooded streets in a neighborhood known as University Hill, home to many university students as well as city residents.

No arrests had been made as of early Monday. But Boulder police and other police agencies had received more than 700 tips, including photos and cellphone video, of the violence, said police spokeswoman Dionne Waugh. Witnesses were encouraged to report information to police, to a special tip line and to university authorities.

A law enforcement armored vehicle and a fire truck were damaged, as were several private vehicles.

Health officials warned Saturday’s events could lead to a surge in coronavirus cases and urged anyone at the scene to quarantine for at least 10 days and to get tested for COVID-19. CU Boulder students returned to campus for hybrid and in-person learning in mid-February.