Police say antisemitic attacks in Los Angeles may be related 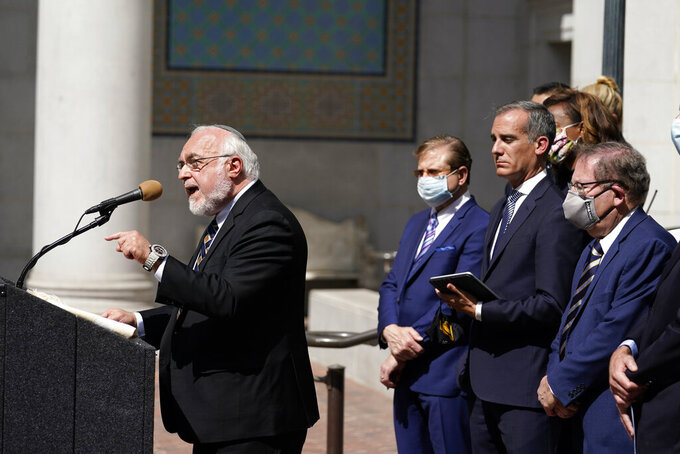 Rabbi Abraham Cooper, left, of the Simon Wiesenthal Center, speaks in front of civic and faith leaders, including Mayor Eric Garcetti, back center, outside City Hall, Thursday, May 20, 2021, in Los Angeles. Faith and community leaders in Los Angeles called for peace, tolerance and unity in the wake of violence in the city that is being investigated as potential hate crimes. (AP Photo/Marcio Jose Sanchez)

The violence in the city's Fairfax District both involved vehicles flying Palestinian flags, according to witnesses and video.

Dominic Choi, a deputy chief in the Los Angeles Police Department, said investigators have reached a “critical point” in the cases. The FBI is also involved in the probe.

“We do believe that these two incidents are related, by some evidence that's available," Choi said.

Choi declined to elaborate on the possible connection between the two hate crimes on Thursday during a news conference outside City Hall, where faith and community leaders called for peace and unity in the wake of the violence.

The news conference came hours after Israel and Hamas agreed to a cease-fire Thursday in the bruising 11-day war. At least 230 Palestinians have been killed, as well as a dozen people in Israel, amid the heavy fighting.

Los Angeles Mayor Eric Garcetti, who is Jewish, said it's understandable that passions run high as peace is negotiated.

“That's OK, that's human,” he said. “What is not OK is to take that out on innocent people, on groups of folks who are dining, because of who they are, to try to target and chase people down because of their religion, or what you think they look like.”

On Monday, two motorists chased a Jewish man who was on foot. The man, a Hasidic Jew and a father of six, was forced to “literally run for his life,” according to Rabbi Abraham Cooper of the Simon Wiesenthal Center in Los Angeles.

The next night, pro-Palestinians in "a similar caravan of cars" got out and attacked Jewish diners who were seated outside a sushi restaurant in the Beverly Grove area, police said. Witnesses said members of the caravan were flying Palestinian flags.

Both crimes were captured on video, officials said.

Hedab Tarifi of the Islamic Center of Southern California, who is a Palestinian and was born in Gaza, decried the violence against the Jewish bystanders in LA.

“Hate and violence of any and all sorts should be condemned,” she said. “Whether on the streets of Los Angeles, in Jerusalem or Gaza.”

Between Jan. 1 and April 30, hate crimes increased 80% in Los Angeles over the same time period last year, Choi said. Most of them were race-related incidents.

The city — and much of the country — has also been rocked by a surge in anti-Asian violence over the last year because the coronavirus pandemic originated in Wuhan, China. Some have blamed former President Donald Trump for fanning flames of intolerance by calling COVID-19 the “China virus” and “kung flu.”

President Joe Biden on Thursday signed bipartisan legislation intended to curtail a striking rise in hate crimes against Asian Americans and Pacific Islanders. The law expedites the review of hate crimes at the Justice Department and makes grants available to help local law enforcement agencies improve their investigation, identification and reporting of incidents driven by bias, which often go underreported.