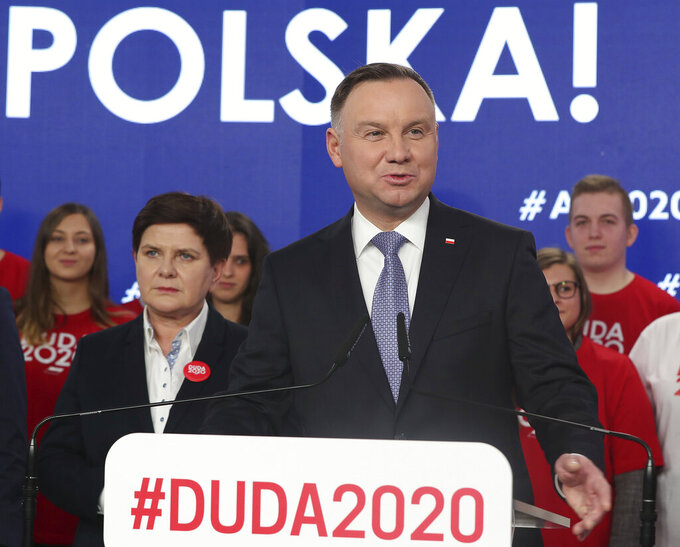 WARSAW (AP) — The Polish government’s determination to move forward with a scheduled presidential election next month by making it an all-postal vote has sparked anxiety and anger amid the coronavirus pandemic, with critics slamming the plan as a threat to the health of both the public and Poland's democracy.

Health experts say that voting by mail is much safer than doing it in person at polling stations during the pandemic. But with medical research ongoing, there is worry that mailed ballots may carry lingering traces of the virus that could potentially infect voters, postal workers and election officials tallying the returns.

Political concerns are probably even bigger than fears about safety in the run-up to Poland's May 10 election. Critics have voiced suspicions that the conservative ruling party insisted on holding the presidential vote because its candidate is strongly favored to win now but could lose support during a post-pandemic economic downturn.

The leader of Poland’s main opposition party, Civic Platform president Borys Budka, said “the health and life of Poles” are at stake in whether the election takes place and “no responsible person would call for participation in such a vote.”

With little time for public agencies to prepare, it's unclear if the switch to by-mail voting is legal or how the government intends to pull off a secure election that involves delivering ballot materials to around 30 million people and getting them back for counting.

If no candidate secures a majority, the already stretched postal service and election officials would need to repeat the process for a presidential runoff two weeks later. The head of the State Electoral Commission wrote on Twitter that the validity of an election organized in a rushed way could be called into question.

Civic Platform is calling for the election to be postponed by a year. A faction inside the government proposed extending the term of incumbent President Andrzej Duda by two years but not allowing him to run for reelection in 2022.

The ruling Law and Justice party says the date of the election is dictated by the Polish Constitution and that going ahead with the mail-in voting would be a democratic victory that poses no health risk. Duda and party leader Jaroslaw Kaczynski, who is regarded as the driving force behind the government, have argued their political opponents want a delay because they know they are going to lose the presidential race.

“People always blame the authorities under such circumstances,” Kaczynski recently said on state broadcaster Polish Radio 1. “Today, the opposition probably sees its chances as very small but believes that a year from now the situation will be different.”

The political opposition argues that holding the election as planned would be undemocratic because Duda's challengers are limited to campaigning online and can't meet with voters at rallies due to social distancing measures in place to curb the spread of the virus.

Politicians from Poland's opposition parties have pointed out that Russian President Vladimir Putin even postponed a referendum on proposed constitutional changes that would allow him to remain in power until 2036 if he keeps winning reelection.

The European Union, which has tangled with the Law and Justice government over its moves to assert more control of the judicial system, also has expressed doubts that a postal vote organized at such short notice would be free and fair.

In a resolution approved last week, EU lawmakers called the Polish government's plan “totally incompatible with European values” and said it “may endanger the lives of Polish citizens and undermine the concept of free, equal, direct and secret elections as enshrined in the Polish Constitution."

Maciej Pach, a constitutional law expert at Jagiellonian University in Krakow, also thinks the postal vote would be unconstitutional because election law changes must be made at least six months in advance. Delivering a ballot to the home of every voter also constitutes an unlawful form of pressure to participate in the election, Pach said.

Postal workers have questioned whether they can deliver voting packages on time, especially when some 30% of the country's 26,000 mail carriers are quarantined or on sick leave. Labor unions that represent postal workers say their members are afraid of handling the ballots and don’t have proper protection from the virus.

"They don’t want to expose their own health or life or that of their families,” Free Trade Union of Postal Workers chairman Piotr Moniuszko said.

The election still is not a done deal. Poland's Senate, which is controlled by the opposition, has not finished Senate Speaker Tomasz Grodzki has said that amid general public anxiety over the virus, senators should reject the bill.