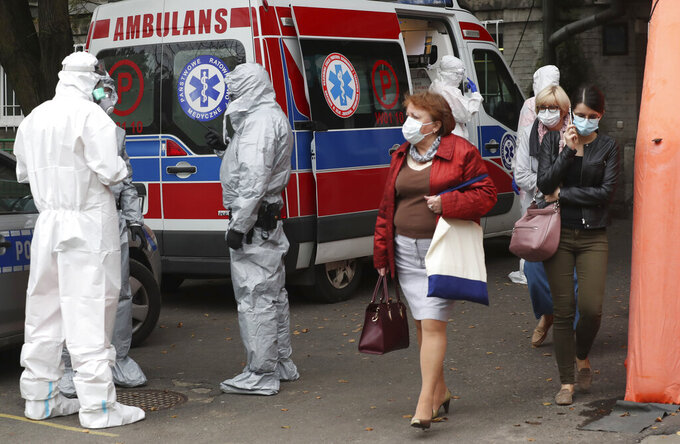 Women with anti-coronavirus masks pass by an ambulance team wearing anti-COVID-19 outfits at a hospital in Warsaw, Poland, Thursday, Oct. 8, 2020. Poland's government has announced the entire country a yellow zone after the number of new registered case of coronavirus infection spiked to almost 4,300 on Thursday. The yellow zone rules take effect Saturday and will require Poles to wear masks in all public spaces, also in the open air. (AP Photo/Czarek Sokolowski)

WARSAW, Poland (AP) — Poland’s opposition says the country's education minister-designate visited his grandmother in the hospital, in breach of rules designed to control the spread of the coronavirus.

Two days later, lawmaker Przemyslaw Czarnek tested positive for COVID-19, forcing many staff and patients at the hospital to go into quarantine.

Members of the Civic Coalition said Friday they have notified the police and prosecutors that Czarnek exposed others to danger when he entered the hospital in Lublin on Saturday.

“This was unethical, violated the bans currently in force and exposed others to danger, which is a criminal offense” that carries a prison term of up to three years, Szlapka said.

Czarnek has said he had no COVID-19 symptoms at the time and was allowed in because his grandmother was in a very serious condition. The hospital director, who is among those now in quarantine, confirmed that.

Hours before the reshuffled government was to be sworn in by President Andrzej Duda on Monday, Czarnek reported that he was infected, causing the ceremony to be postponed for a day. Czarnek has not yet been sworn in.

Poland is currently seeing a steep spike in cases, with more than 4,000 a day being recorded, leading the government to declare the whole country a yellow zone where face masks and social distancing are required even in the open air, effective Saturday.