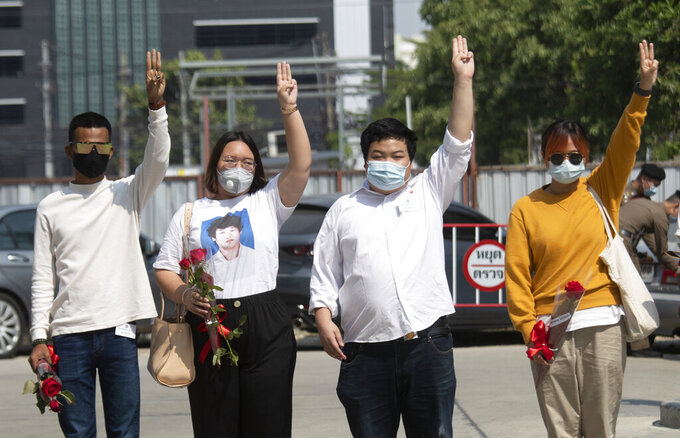 BANGKOK (AP) — Thai officials on Wednesday filed criminal charges against a popular former politician, accusing him of defaming the monarchy by broadcasting criticism of government efforts to secure supplies of coronavirus vaccines.

The action against Thanathorn Juangroongruangkit came just a day after Prime Minister Prayuth Chan-ocha told reporters that that his government will prosecute anyone who shares false information about coronavirus vaccines.

Thanathorn, former leader of the dissolved Future Forward Party, accused the government of acting too slowly in procuring the vaccines. He also pointed out that the government’s main contract for vaccine supply was made with a Thai company owned by the royal palace. The government and the company deny any wrongdoing.

“What Thanathorn said is not true at all. The monarchy has nothing to do with the vaccines and they are not in the position to respond to him in the public,” said Thosaphol Pengsom, a vice minister attached to the prime minister’s office.

Vice Minister of Digital Economy and Society Newin Chochaiyathip said at a news conference that anyone who shares Thanathorn’s broadcast or distorted information about vaccines and monarchy judged to be distorted would be prosecuted.

The government has increasingly used the law against defaming the monarchy to crack down on critics. The law, widely know as Article 112, makes insulting King Maha Vajiralongkorn or his family punishable by three to 15 years’ imprisonment.

Thanathorn has long been a thorn in the side of Prayuth’s government. His party, critical of the army, a pillar of the country’s establishment, made a strong third-place showing in the 2019 general election, but he was forced out of Parliament when a court ruled that he had broken an election law. His party was later dissolved on a similar technicality. He has faced a number of legal cases which supporters charge are politically motivated.

Their appearance at a central Bangkok police station was the latest skirmish between Thailand’s royalist establishment and the youth-led protest movement that caught fire last year with a series of well-attended rallies around the country calling for major political reforms, including of the country’s influential monarchy.

The six protesters were charged by police with insulting or expressing malice toward the king in connection with a December protest at a Bangkok shopping mall. The charge sheet offers no details.

According to a member of Thai Lawyers for Human Rights, who asked for anonymity because she was not authorized to release information, police explained that the charges were related to wearing short cropped T-shirts at their protest to make fun of the king and his queen. Two minors were not accused of wearing inappropriate attire but of having signs or making hand gestures supporting the protest.

Photographs of the king casually wearing cropped T-shirts have circulated widely on social media and have been published overseas, but not in Thai mass media, which does not publish undignified photos of the royal family.

The monarchy is revered by many Thais and until recently was almost universally treated as an untouchable institution. But the protest movement charges that monarchy is unaccountable and wields too much power is what is supposed to a democratic constitutional monarchy.

From November to January this year, about 50 people have been charged with lese majeste — though none has yet gone to trial. Most if not all cases were based on statements made at public rallies or posted on the internet.

Critics says the law can easily be abused because anyone — not just royals or authorities — can lodge a complaint. After Vajralongkorn took the throne in 2016, he informed the government that he did not wish to see the law used.

But the escalating criticism of the king late last year prompted Prayuth to declare that the protesters had gone too far and could now expect to be prosecuted for their actions.