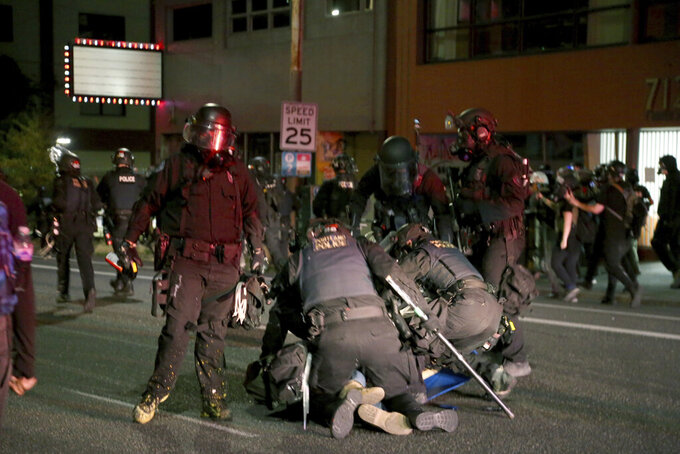 Portland police declare a riot at the Multnomah County Building, on Tuesday, Aug. 18, 2020, in Portland, Ore. Officers made at least two arrests of protesters. Officials say protesters in Portland broke out the windows of a county government building, sprayed lighter fluid inside and set it on fire in a demonstration that ended with clashes with police. (Beth Nakamura/The Oregonian via AP)

PORTLAND, Ore. (AP) — Protesters in Portland broke out the windows of a county government building, sprayed lighter fluid inside and set a fire in a demonstration that started Tuesday night and ended Wednesday morning with clashes with police, officials said.

The fire at the Multnomah Building damaged the county government's office of community involvement, where Oregon's first gay marriage took place and where protective gear has been distributed to try to prevent the spread of the coronavirus, said Multnomah County Chair Deborah Kafoury.

“This is the heart of our County, where people in our community come to get married, get their passports, and celebrate their cultural traditions and diversity,” she said in a statement.

Demonstrations in which fires have been set, objects have been thrown and police have fired “crowd control munitions” have gripped Oregon’s biggest city for more than two months following the police killing of George Floyd in Minneapolis.

Participants have repeatedly broken into the offices of a police union headquarters building and last month clashed for weeks with federal agents dispatched to protect a U.S. courthouse targeted by protesters.

Portland officers late Tuesday declared a riot outside the county building after demonstrators in a crowd of about 200 started fires in dumpsters, used rocks to smash first floor windows and tossed burning material inside, police said in a statement Wednesday. A subsequent fire in the building triggered alarms and the building's sprinkler system, police said.

The riot declaration allows officers to use crowd control methods such as tear gas or flash bang devices. Police said in their statement that some unspecified “crowd control munitions” were used to disperse people but that officers did not use tear gas.

Two protesters were arrested and one officer was left with minor injuries in scuffles as police broke up the demonstration, authorities said. A photo distributed by police showed one window of the building spray painted with a bull's eye and the words “Aim Here.”

Portland Police Chief Chuck Lovell said in a statement Wednesday afternoon that he continues to get asked how this will end.

“The solution is in a critical mass of community and partners coming together to denounce this criminal activity and call it out as it does not represent what we know our community at large wants or values,” Lovell said.

Kafoury asked residents to support the community involvement office, adding that “there is grave injustice in our world and there is a violent and tragic history of oppression in our County. I am committed to transformational change.”

Also Wednesday, federal authorities announced that a Portland man was arrested and charged with assaulting a federal officer with a baseball bat in what they described as a riot on July 27 at the Mark O. Hatfield U.S. Courthouse.

Dakotah Horton, 24, made an initial appearance in federal court on Tuesday, according to U.S. Attorney Billy J. Williams. On Wednesday, Horton was ordered detained pending further court proceedings, Williams said in a news release. It wasn't immediately known if Horton has a lawyer to comment for him.

Police on Tuesday said they were trying to find Marquise Love, a 25-year-old suspected of punching and kicking a man to the ground Sunday after the man crashed his pickup truck on a sidewalk near ongoing demonstrations.

The man assaulted has been released from a hospital and is recovering.

A social media account apparently connected to Love has been disabled and efforts to locate him for comment have not been successful.