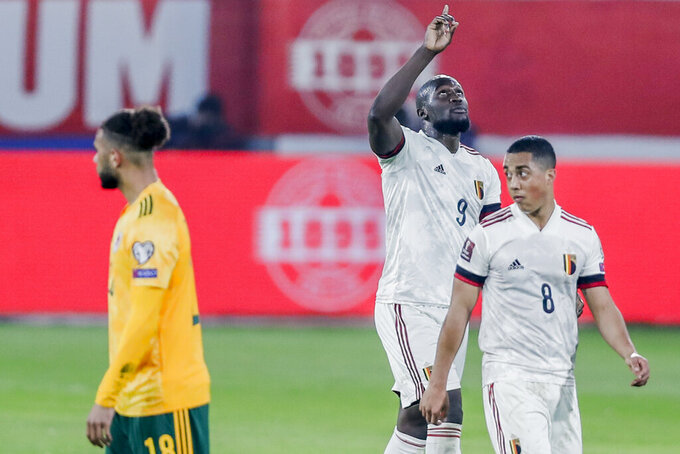 Portugal and Belgium were left frustrated by draws in their World Cup qualifying matches. Ireland was left in shock.

Cristiano Ronaldo stormed off after he failed to score as Portugal was held 2-2 by Serbia — though TV replays indicated he did put the ball over the line — while top-ranked Belgium could only salvage a 1-1 draw in the Czech Republic. On a night when underdogs tested big names, Luxembourg pulled off the biggest shock of all to beat Ireland 1-0.

Stéphanie Frappart made more history as the first woman to referee a men's World Cup qualifier as the Netherlands beat Latvia 2-0. She's previously made similar breakthroughs in the men's Champions League and French league. Another female referee, Kateryna Monzul, is taking charge of Sunday's game between Austria and the Faroe Islands.

After Norway players had challenged next year's host Qatar on its human rights record, another team joined in Saturday. Dutch players wore T-shirts before the game bearing the message "Football supports change" before the Netherlands' 2-0 win over Latvia. Norway's players urged more teams to follow suit, with shirts asking the question “Next?”

Fans remain a rare sight in European soccer amid the coronavirus pandemic, but some countries are changing that. Russia had 13,000 supporters for its 2-1 win over Slovenia, the biggest crowd at this week's qualifying games. The Netherlands had 5,000 fans as part of a trial scheme to test how more public events can reopen safely.

Ronaldo tossed his captain’s armband on the field as he walked off at the end of Portugal's draw with Serbia, believing he should have had a winning goal. His shot was heading over the line when Serbia’s Stefan Mitrovic slid and cleared the ball. TV replays indicated the ball did cross the line, but goal-line technology and video review aren't used in the World Cup qualifiers.

Diogo Jota put the reigning European champions ahead with a pair of first-half headers. But halftime substitute Nemanja Radonjic set up two goals to pull the hosts level with half an hour to play. Serbia defender Nikola Milenkovic saw a direct red card in stoppage time for a dangerous studs-first tackle on Danilo.

Also in Group A, Luxembourg’s Gerson Rodrigues scored with five minutes remaining to humble the Irish, who remained winless in 10 games under coach Stephen Kenny. Ireland failed to deal with a high ball and Rodrigues pounced to smash a dipping shot past 19-year-old goalkeeper Gavin Bazunu from 25 yards on Bazunu's international debut.

Romelu Lukaku extended his impressive scoring record with Belgium to salvage a 1-1 draw against Czech Republic as the top-ranked team was lucky to escape with a point.

Facing an inspired Czech side which hit the woodwork twice, Belgium struggled defensively and conceded early in the second half. Lukaku, Belgium’s all-time leading scorer, then took his tally to 59 goals in 91 international matches after Kevin De Bruyne’s brilliant assist.

Both teams had depleted squads after German clubs refused to release players including Belgium's Thorgan Hazard because they could have been forced into quarantine after returning from the Czech Republic.

In the other Group E match, Belarus twice came from behind to kick off its World Cup qualification campaign with a 4-2 win over 10-man Estonia.

The Netherlands got its World Cup qualification back on track by beating Latvia 2-0, while Turkey continued its strong start in Group G with a 3-0 victory over Norway to go top on goal difference.

Steven Berghuis curled in a left-footed shot in the 32nd minute and Luuk de Jong headed home a corner in the 69th as the Netherlands rebounded from a 4-2 midweek defeat in Turkey.

In a match played in the Spanish city of Malaga, Ozan Tufan scored a goal in each half and Caglar Soyuncu headed his country’s second goal as Turkey easily beat Norway.

Croatia looks nothing like the team which reached the World Cup final in 2018, but at least its five-game winless run is over.

A defensive error gave Mario Pasalic the chance to score the only goal in a 1-0 win over Cyprus, but it wasn't the emphatic victory Croatia wanted after its opening loss to Slovenia. Luka Modric made his 135th appearance for his country, breaking a tie for the record with former full back Darijo Srna.

Russia is top of Group H after beating Slovenia 2-1 to pick up its second win. Artem Dzyuba scored both of Russia's goals to move within one goal of the Russian team record of 30 held by retired striker Alexander Kerzhakov. There were 13,000 people in the stadium in Sochi on the Black Sea coast because of competition rules and Russian law. Malta earned a rare point in a 2-2 draw with Slovakia.