In Portugal presidential race, how high can a populist fly? 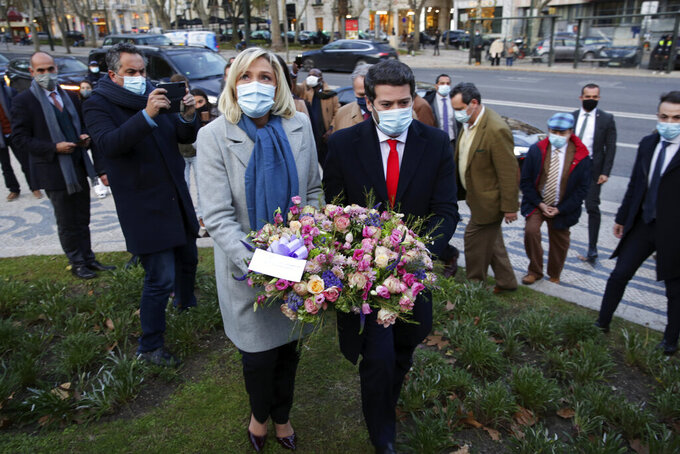 Presidential candidate Andre Ventura and French far-right populist Marine le Pen, center left, lay a wreath at the monument to WWI fallen soldiers in Lisbon, Friday, Jan. 8, 2021. Ventura is the leader of a populist party called CHEGA! (ENOUGH!), founded in 2019. Portugal holds a presidential election on Sunday, Jan. 24, 2021 and the moderate incumbent candidate is widely seen as the sure winner. But an intriguing question for many Portuguese is how well a brash new populist challenger fares in the ballot. Mainstream populism is a novelty in Portugal. (AP Photo/Armando Franca)

LISBON, Portugal (AP) — With the moderate incumbent candidate widely seen as the sure winner of Sunday’s presidential election in Portugal, the most intriguing question for many Portuguese is how well a brash new populist challenger will fare in a ballot skewed by a surging COVID-19 pandemic.

Mainstream populism, which has upended political assumptions elsewhere in Europe in recent years, is a novelty in Portugal.

But that could change as taxpayers squeezed by the economic downturn, vexed by hefty bailouts for banks and galled by corruption look for somewhere to vent their anger. A significant political shift in Portugal could help add fresh momentum to a continental trend.

Lawyer and former TV soccer pundit André Ventura leads a right-wing populist party called CHEGA! (ENOUGH!), founded in 2019. Nobody expects him to win on Sunday, as he is polling around 11% compared with more than 60% for incumbent Marcelo Rebelo de Sousa. Even so, Ventura, 37, could conceivably place second among the seven candidates, drawing a level of support that until recently was unthinkable and sending a shudder through Portuguese politics.

A recent surge in the COVID-19 pandemic that has placed Portugal among the worst-hit countries in the world for new daily infections and deaths has added an unpredictable ingredient into the contest, even though the head of state is not directly involved in organizing the country's response.

A potentially low turnout as voters, especially the elderly, possibly shy away from busy polling stations could upset expectations and allow determined populist sympathizers to capture a bigger share of the ballot.

Ventura's showing “is quite something for a new party,” says Marina Costa Lobo, a senior researcher at Lisbon University’s Institute for Social Sciences. “He has gained a lot of visibility, a lot of exposure.”

Like other populists, Ventura portrays himself as leading common people against an entrenched and corrupt elite. French far-right populist Marine le Pen flew in for one of his campaign events in Lisbon. Ventura has participated in rallies in Italy held by Matteo Salvini, leader of the right-wing League party.

Ventura occupies his party’s single seat in Portugal’s 230-seat parliament. But he punches above his weight by generating headlines.

He is eloquent, happy to scrap in public and disdained by mainstream parties. His firebrand speeches have whipped up public support, especially on social media. He calls his supporters the “Portuguese Popular Army.”

He has complained that “minorities are living at our expense” and questions recent liberalizing trends. He asked in parliament last year, “You can change sex at 16 but you can’t go to a bullfight! Doesn’t this country have things the wrong way round?”

Ventura ticks the populist boxes. He wants heavier prison sentences, including currently disallowed life terms, for some crimes and chemical castration for convicted pedophiles and rapists before their release from prison. He opposes letting migrants, especially Muslims, into Europe and supports police demands for higher pay. He also wants to reduce the number of lawmakers in parliament and their salaries.

Major scandals in recent years have provided grist for his cause. Corruption cases against a former prime minister and against the head of the country’s largest private bank, which went bankrupt, have fueled outrage and tainted Portugal’s two main parties, the center-left Socialists and the center-right Social Democrats.

Taxpayers, meanwhile, shelled out more than 20 billion euros ($24 billion) to help banks between 2008 and 2019. That’s a substantial sum in one of the European Union’s smaller economies.

The election frontrunner, incumbent Rebelo de Sousa, is the kind of target Ventura relishes: An establishment figure with a 46-year political career, including a stint as leader of the Social Democratic Party.

Over his past five years as president, the gaunt 72-year-old has displayed the patrician bearing and cordial manner expected of a head of state. Though a president in Portugal has no legislative power, which lies with the government and parliament, the role carries considerable influence.

But Rebelo de Sousa’s once cozy relationship with the head of what was Portugal’s biggest private bank, including luxury vacations spent together, and his long spell at the heart of power, have left him vulnerable to attacks from Ventura and the election’s five other candidates.

Even so, Rebelo de Sousa has during his term kept his approval rating above 60% and is held in affection by many in this country of 10.3 million.

He cultivates an image of man of the people: Portuguese capture photos of him standing alone in line with his groceries at the supermarket, having a shave at a barber’s shop and chatting with excited children on the beach near his house in Cascais, an old fishing town 30 kilometers (18 miles) west of Lisbon. His small security detail keeps a discreet distance.

On Sunday, more Portuguese are likely to value those traits than Ventura’s pugnacity.