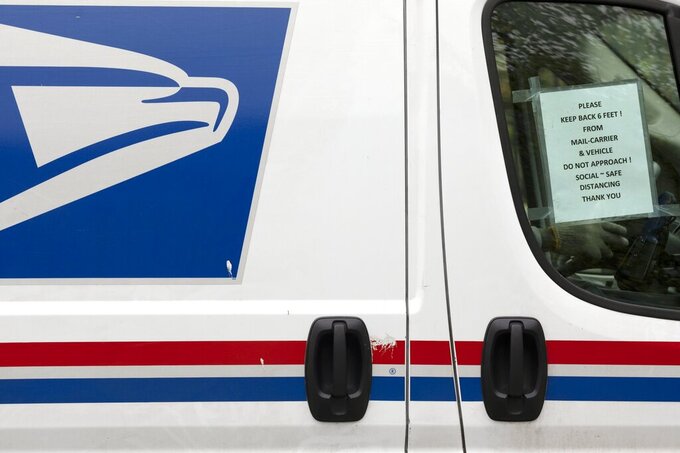 FILE - In this May 1, 2020, file photo, a sign in the window of a U.S. mail truck in Boston asks that people not approach closer than six feet due to concern about COVID-19. As mail voting takes center stage in the November election because of the coronavirus pandemic, officials in Massachusetts are voicing concern about the ability of the U.S. Postal Service to carry out its duties. Unionized postal workers said the federal agency has removed at least a dozen high capacity mail sorting machines in the state. (AP Photo/Michael Dwyer, File)

BOSTON (AP) — As mail voting takes center stage this election because of the coronavirus pandemic, officials in Massachusetts are voicing concern about the ability of the U.S. Postal Service to carry out its duties.

Democratic state Attorney General Maura Healey joined other state attorneys general on Tuesday in announcing federal lawsuits meant to block changes President Donald Trump’s administration has made to the embattled agency ahead of the election.

Postmaster General Louis DeJoy said Tuesday he would suspend the controversial moves until after the election “to avoid even the appearance of impact on election mail.”

But unionized postal workers in Massachusetts say the agency has already removed at least a dozen high capacity mail sorting machines in the state as part of a nationwide reduction plan that some complain is causing slowdowns in mail service.

Nine machines were recently removed from a postal facility in Boston and three more were taken offline in central Massachusetts, union officials told WGBH News on Monday. About 20 pieces of mail sorting equipment were slated to be removed from June to August in the greater Boston-area, which includes Providence, Rhode Island, the news outlet reported.

“Employees on the workroom floor are seeing the impacts of the new Postmaster General’s policy changes,” John Flattery, president of the central Massachusetts chapter of the American Postal Workers Union, said in a statement Tuesday. “These delays are the result of the Trump Administration’s willingness to harm an American institution like the Postal Service in the hope of winning an election."

Massachusetts Secretary of State William Galvin, a Democrat who oversees the state’s election process, also criticized the cutbacks as “politically motivated" and said the state's only recourse was litigation.

“We’re alarmed,” Galvin said. “The postal service has been able to provide ballot delivery even during wars, so I don’t understand why this would be such a problem.”

More than one million voters in Massachusetts have requested mail ballots ahead of the state’s Sept. 1 primary, and nearly 150,000 completed ballots have so far been returned, he said. The deadline to request a mail ballot is Aug. 26.

Galvin urged people to mail their completed ballots as soon as possible, or consider handing them in at designated local drop boxes. Massachusetts residents can also take advantage of in-person early voting starting Saturday, he said.

“This timing is more than suspicious," McGovern said in a statement about the postal service changes. "It’s outrageous, it’s wrong, and I believe it’s unconstitutional.”

Postal service officials have said the agency reductions, which included changes to staff overtime, were due to lower mail volume during the pandemic.

Union officials, however, have been warning the reductions will prevent the agency from being able to handle the influx of election-related mail expected this year, not to mention seasonal surges in mail volume around the holidays or during tax season.