Power plant stacks that loom over Arizona set to come down 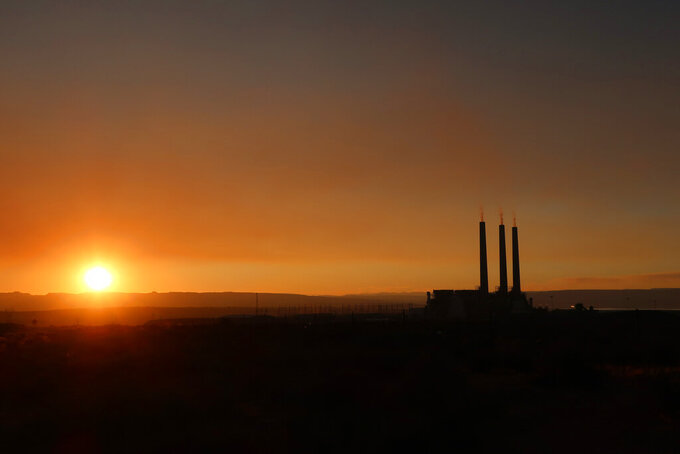 FILE - This Aug. 19, 2019, file photo shows the sun setting behind the coal-fired Navajo Generating Station near Page, Ariz. The three towering concrete stacks are the most visual reminder of a coal-fired power plant that operated for decades in far northern Arizona. On Friday, Dec. 18, 2020, they are scheduled to come down. The 775-foot structures loomed over the Navajo Generating Station, which closed last year. (AP Photo/Felicia Fonseca, File)

FLAGSTAFF, Ariz. (AP) — Three towering concrete stacks are the most visual reminder of a coal-fired power plant that operated for decades in far northern Arizona. On Friday, they are scheduled to come down.

The 775-foot (236-meter) structures loomed over the Navajo Generating Station, a 2,250 megawatt plant that closed last year as natural gas became a cheaper alternative for electricity. Their flashing lights became a beacon in the community and a sign to travelers in a remote area that they were approaching Page.

“I have mixed emotions because I've spent most of my life as a constructor, and now I'm wearing a different hat in the demolition mode,” said Gary Barras, a project management director for the Salt River Project, the Arizona utility that operated the plant. “I know personally how hard it was to design and build those stacks.”

Environmentalists and some members of the Navajo and Hopi tribes fought years to shut down the plant that was among the largest in the West in favor of a switch to renewable energy.

“We are witnessing an artifact of a time when a coal-fired power plant was preferable to damming the Grand Canyon,” said Roger Clark of the Grand Canyon Trust. “We’ve since learned that cooking the planet to keep Phoenicians cool is a bad idea.”

The power plant was built to power the Southwest and a canal system that delivers Colorado River water to Arizona’s major metropolitan areas. It shut down in November 2019.

The stacks will come down in a way that is similar to cutting down a tree. Crews have sawed the back side of the stacks so they will fall to the northeast largely on to concrete pads where water treatment, ash handling and brine concentrator systems once stood.

Crews have also gutted transformers, wiring and elevators from the first 30 feet (9 meters) of the stacks to prepare. Small blocks of concrete have been cut and knocked out of the structures to weaken them. Windows and vents have been removed and reinforced to keep the stacks from twisting, said Nathan Betts, construction manager for Tetra Tech, the company overseeing contractors on site.

To prevent the stacks from falling earlier, crews won't release the last bit of tension until Friday morning before about 1,530 pounds (694 kilograms) of dynamite are detonated.

“We’re going to let gravity do the rest of the work,” Betts said.

The stacks will fall sequentially within seconds and lie next to each other, if everything goes according to plan, Betts said.

No one will be allowed within a 2,000-foot (609-meter) radius of the stacks for safety reasons. The demolition also wasn't advertised because of concerns over people gathering in the midst of the coronavirus pandemic, Salt River Project spokesman Scott Harelson said.

Crews will come in after the dust settles to separate rebar from concrete and recycle what they can.

The work is part of a $150 million decommissioning of the plant that is on land leased by the Navajo Nation. The buildings that housed the boilers — what Barras called the proverbial tea kettles — will go next, he said.

Most workers at the power plant never spent any time in the stacks that offer expansive views of the region, including Lake Powell, one of the largest man-made reservoirs in the country and the Navajo reservation.

The stacks that will come down Friday weren't original to the plant. They were built in the 1990s to accommodate emissions from sulfur dioxide scrubbers that were installed as part of an agreement among the plant owners, the federal government and environmental groups.

The original ones were the same size but had been reduced to 220 feet (67 meters) and came down earlier this year.