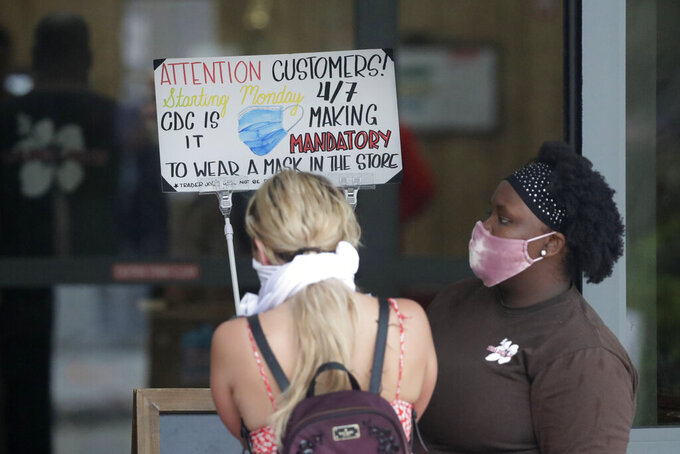 A grocery store employee, right, limits the number of customers entering the store, Tuesday, April 7, 2020, in Miami Beach, Fla. According to their website, "the City of Miami Beach has added a requirement in the latest Emergency Order, effective April 7, 2020, for all employees and customers of grocery stores, pharmacies and restaurant facilities to wear a form of covering over their nose and mouth at all times when inside these establishments." (AP Photo/Wilfredo Lee) 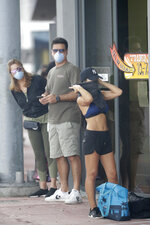 TALLAHASSEE, Fla. (AP) — Pressure mounted on Florida Gov. Ron DeSantis on Tuesday to make jobless benefits retroactive as the state's newly unemployed continued to be mired in an unemployment system riddled with glitches and uncertainty amid the coronavirus outbreak.

Amid rampant filing troubles, it remained unclear how quickly the state could begin issuing checks to hundreds of thousands of Floridians left without income because of stay-at-home orders and the economic downturn.

Meanwhile, congressional Democrats called on Gov. Ron DeSantis, a Republican, to extend unemployment benefits beyond the current 12-week limit and raise the $275 a week cap, among the lowest in the country.

“This combination of low pay and short eligibility is one of the least supported benefits programs in the country, despite our relatively high cost of living," said Rep. Lois Frankel, a South Florida Democrat, during a call with reporters and other Democrats in Congress.

The total number of applications for unemployment since March 15 was quickly approaching 600,000, while others continued to report problems with filing claims online or getting help on phone lines — despite assurances from the state that the system should now be able to handle the increased volume.

On Monday, the Department of Economic Opportunity, which processes Florida jobless claims, said it installed 72 new servers to handle the load and said a backup system was again functioning after officials discovered it was not online.

And it said it was deploying hundreds of additional people, many on loan from other state agencies, to handle the call volume. DeSantis also announced Tuesday that FedEx stores statewide would begin passing out paper applications for those without computer access. They can be returned to the state for free.

But many reported continued problems. Hundreds gathered outside a library in the Miami suburb of Hialeah in hopes of getting paper forms, many violating social distancing guidelines.

“Governor, we want you to know that this process is not fixed,” Frankel said. “Very embarrassingly and tragically, Florida was very, very ill prepared to meet this demand.”

Florida's 12-week cap on benefits matches that of North Carolina's as the lowest number of weeks of eligibility in the nation. Only nine states offer fewer than 26 weeks of unemployment benefits.

The Democrats called on DeSantis to use his executive powers — or call a special legislative session — to raise the benefit period to 26 weeks and to raise the amount of benefits to better match the state's cost of living.

And they called on the governor to make benefit payments retroactive to the first day of unemployment.

Department of Economic Opportunity Director Ken Lawson, under fire because of his agency's failures, said he was looking into the matter. DeSantis did not address that issue at an afternoon news conference.

Under state law, the clock generally starts ticking on the day an applicant files a claim — and not necessarily a person's last day on the job.

That reality means the vast majority of Floridians won't be able to get checks after being laid off or furloughed because of stay-at-home orders and the downturn.

Michael Newell, who lost his job in medical sales last month after business began drying up, managed to file his application more than two weeks ago.

“I'm still waiting,” he said. “There's no news, and I don't really want to fight with the phone system after hearing all of the horror stories.”

In the meantime, he's been advertising online to pick up work as a landscaper.

“My wife and I have savings, and hopefully the unemployment stuff will come through,” he said while raking leaves late Monday afternoon. “This is a full economic shutdown.”

Meanwhile, DeSantis at his news conference touted his acquisition for the state of the controversial drug hydroxychloroquine, an anti-malarial medication that President Donald Trump and his administration have pushed as a possible cure. DeSantis said some Florida doctors are using the drug in conjunction with antibiotics for some severely ill patients.

Dr. Sunil Kumar, a Broward County pulmonologist, told reporters through video conference that he is using the drug for hospitalized patients along with other strategies.

“We are trying all different modalities — it is not just the medication,” he said. “I think we need to have every option.”

Dr. Carlos Campo, who heads the intensive care unit at Tallahassee Memorial Hospital, cautioned at the press conference that no one with coronavirus should try hydroxychloroquine outside a hospital because it can cause fatal heart arrhythmias.