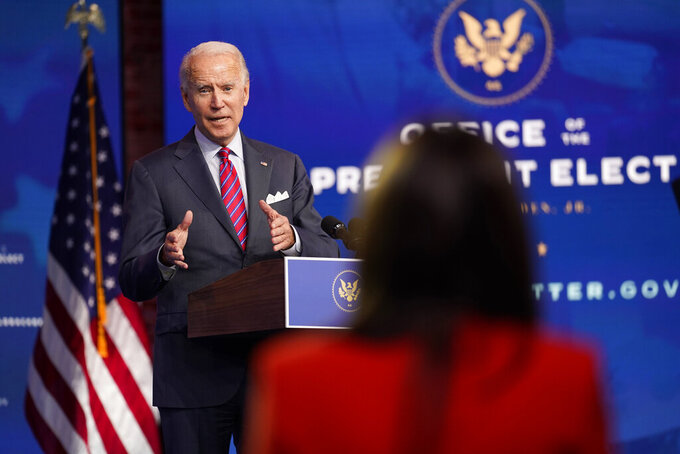 WASHINGTON (AP) — President-elect Joe Biden is facing increasing pressure to expand the racial and ideological diversity in his choices for Cabinet and other top jobs. A month and a half before he takes office, he's drawing rebukes from activists who fear he'll fall short on promises to build an administration that looks like the country it governs.

Of the nine major picks Biden has made so far, only two — Secretary of State choice Antony Blinken and chief of staff Ron Klain — are white men. That's a historic low that so far outpaces the historically diverse Cabinet that Barack Obama assembled in 2009.

But civil rights leaders are grumbling that none of the “big four” Cabinet positions – the secretaries of state, defense and treasury and the attorney general – has yet gone to a person of color. And Biden is declining to commit to doing so.

“I promise you, it'll be the single most diverse Cabinet based on race, color, based on gender that's ever existed in the United States of America,” the president-elect said instead during a news conference Friday.

That came after Congressional Hispanic Democrats expressed dismay during a call with Klain and other Biden advisers on Thursday about the treatment of New Mexico Gov. Michelle Lujan Grisham, who reportedly removed her name from consideration to be the new administration's interior secretary. They urged that she remain a candidate to head the more prominent Department of Health and Human Services, but it's not clear she will.

“I do think there needs to be a little more focus on the progressive wing of the party as well as African Americans," Martin Luther King III, the son of the slain civil rights leader, said in a phone interview Friday. “But you can’t assume that that’s not going to be addressed.”

Biden already faces tough Senate fights to get some of his key picks confirmed by Republicans, and discontent among his own supporters over his commitment to diversity could prove especially problematic. He's urging bipartisanship but could find himself in a situation similar to Obama, who took office in 2009 talking of moving past political scuffling but underestimated strong pushback in Congress.

Today’s Senate is more bare-knuckled and hyper-partisan than when Biden was vice president, including GOP senators eyeing their own 2024 White House runs. But initial meetings between nominees and senators seem to be going well.

“While we fully expected disagreement with some members of the Senate, we’re gratified by the overwhelming reaction and strong bipartisan acclaim that our nominees have received overall,” says transition spokesman Sean Savett.

During his decades in the Senate and even while serving as Obama's vice president, Biden relied on a small group of close advisers who were largely white. And so far after the election, he has again proven likely to choose people he's most comfortable with for key posts.

In addition to race, another point of contention could come from the progressive wing of the Democratic Party. Many activists cheered Biden's pick for treasury secretary of Janet Yellen, an advocate for policies designed to improve the lives of the working class. But they have otherwise expressed concern that Biden will make major staffing picks who won't push hard enough for significant reforms across a variety of policy areas.

Maurice Mitchell, national director of the Working Families Party advocacy group, said he understands Biden will want trusted advisers, meaning he could lean on people who have long been close to him. But he said that coping with such large challenges as the coronavirus pandemic and an economy in distress while combating economic inequality and institutional racism will require looking beyond “people who have been involved, in some ways, in some of the decisions over 40 years that got us here.”

“The Biden administration needs to choose people who have demonstrated that they are visionaries, are tough fighters who have a large-scale approach of how to use machinery of the federal government to fight for working people,” Mitchell said. “This is not the time for moderation and gradualism.”

NAACP President Derrick Johnson noted that Biden has gone to great lengths to make announcements and staffing decisions related to the pandemic, the economy and climate change, but “we have not seen any of that same energy for racial justice.”

“This is an opportunity for the reset button,” and Biden’s actions need to match his campaign rhetoric on civil rights, Johnson said. He said that Biden has agreed to meet with civil rights leaders for the first time next week — but only after weeks of requests.

Biden, with his long political experience, listens to the criticism but says, “It’s each one of these groups’ jobs to push, push" for diverse leaders across government.

Lorella Praeli, president of Community Change Action, cheered Biden choice of Cuban-American immigrant Alejandro Mayorkas to lead the Department of Homeland Security. But her organization and others will be watching where the president-elect goes from here.

“There are Latinos who are ready for Cabinet-level positions and senior-level roles across our government so it is a matter of choice," Praeli said.

Biden still has many top jobs to fill, and many of the top contenders are people of color.

“The president-elect has said he’s going to have a Cabinet that looks like America, feels like America — and you see that coming into focus,” Rodney Slater, who was transportation secretary for President Bill Clinton, said during a briefing Friday hosted by the Meridian International Center.

Still, things have not gone smoothly for all of those thought to be under consideration. On Thursday's call with Klain, Congressional Hispanic Caucus members said word that Lujan Grisham had declined to be interior secretary shouldn't have become public.

Caucus members asked that at least 20% of all nominated positions be filled by Latinos, including at least one of the “big four” posts.

Klain responded that the Biden team is working toward including Latinos in the big six Cabinet positions -- adding Homeland Security and Health and Human Services to the traditional four, according to a person familiar with the call. Given the selection of Mayorkas, that would seemingly make it less likely that a Latino might be chosen for defense or attorney general.

King said he hoped Biden would appoint an African American to one of the “big four” posts, especially attorney general.