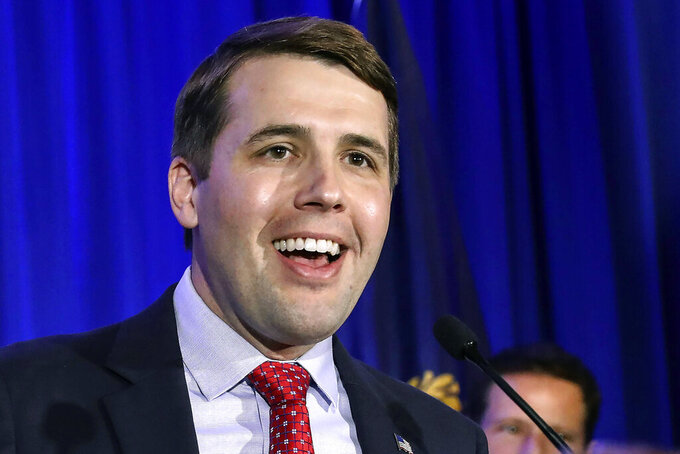 The leading Republican contenders hoping to take on freshman Democratic U.S. Rep. Chris Pappas in November are battling to convince President Donald Trump's voters in New Hampshire that each is the true conservative in the primary race.

Matt Mowers, a 31-year-old former official in Trump’s State Department making his first run for political office, won a coveted endorsement from the president in June. He is among five candidates running in Tuesday's primary for the U.S. House of Representatives seat representing the 1st District in the eastern part of the state.

“There are few more tables that need to be turned upside down in Washington, D.C., and he knows I am not afraid to be there to turn a few over with him," Mowers said, referring to Trump.

Mayberry, an Air Force veteran who served as the state's human rights commissioner, said he is best positioned to represent the state's residents. The 55-year-old realtor, who also organizes gun shows, has played up his over 600 endorsements from Republicans in the state and more than 30 years in New Hampshire. He grew up in Maine.

In a debate that aired Wednesday on WMUR-TV, Mayberry's sharpest attacks were over Mowers' lack of New Hampshire roots. During the campaign, Mayberry has often compared Mowers to Scott Brown, the former senator from Massachusetts who in 2014 ran unsuccessfully for a New Hampshire Senate seat.

Mayberry accused Mowers of moving to New Hampshire only recently and criticized him for working for Christie. Mowers worked for Christie while he was governor and ran his 2016 presidential primary campaign in New Hampshire.

“He is a New Jersey politician who came to New Hampshire, saw a seat, tried to grab it and I think that is wrong,” Mayberry said. “You can't buy 12 flannel shirts from L.L. Bean and say you are a Granite stater. You have got to be here for a while.”

Mowers said he moved back to New Hampshire last year but has been active in New Hampshire politics since 2013. Along with running Christie's primary campaign, he was the executive director of the New Hampshire GOP from 2013 to 2015.

The attacks stem from the Trump endorsement, he said, adding that he has received more than 500 endorsements from New Hampshire Republicans.

Three others running in the primary — Michael Callis, Jeff Denaro and Kevin Rondeau — have struggled to gain traction amid the coronavirus pandemic. None of them were featured at Wednesday's debate.

Mayberry and Mowers have similar conservative agendas and are big backers of Trump's agenda. They have promised to fight illegal immigration, continue building the wall at the southern border, defend the Second Amendment and would support term limits.

Among the few policy differences was that Mayberry opposes Trump's policy on family separation. Even their views on abortion have converged. Mowers is against abortion with a few restrictions and Mayberry, who was at one time for abortion rights, now has a similar position.

Asked about the police killing of George Floyd in Minneapolis and the police shooting of Jacob Blake, both candidates said they would support Trump using the Insurrection Act — in which active duty troops could be sent in to quell violent protests. They also would support more, not less funding, for the police.

Mayberry blamed state leaders in places where violence has happened for “letting the anarchy just run wild." Mowers said people in Kenosha, Wisconsin, and Portland, Oregon, “have been let down by their local leaders and state governors who are not taking strong action to insure people can feel safe in their communities.”

Both praised Trump's coronavirus response and are opposed to national or state mask mandates. Both called for production of supplies in the coronavirus fight to be shifted from China to the United States.

“What this crisis has shown us is that we are way too reliant on China to manufacture key pharmaceutical ingredients, or agriculture ingredients as well as PPE,” Mowers said. “I am kind of tired of seeing a bunch of planes land from Shanghai for our PPE. We can make it in America.”

Lucas Meyer, the campaign manager for Pappas, who is running unopposed in the primary, characterized the debate between the two Republicans as “an absolute race to the bottom without any regard for what our communities need during this crisis.”

This story has been corrected to show that Lucas Meyer, the campaign manager for Pappas, said the last quote — not Pappas.