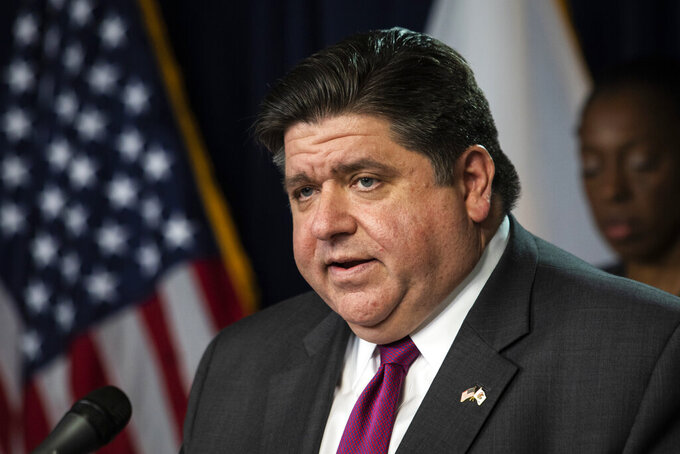 FILE - In this March 30, 2020 file photo, Illinois Gov. J.B. Pritzker speaks in Chicago during the daily update on the state's response to the coronavirus pandemic. Pritzker said during a stop in Rock Island, Ill., Monday, July 27, 2020, that "things are not moving in the right direction" in terms of the COVID-19 pandemic in Illinois, where officials reported a sixth day in a row of more than 1,000 newly confirmed cases. Earlier in Quincy, the Democrat said he didn't expect life in Illinois to return to normal until sometime next year. (Ashlee Rezin Garcia/Chicago Sun-Times via AP, File)

State public health officials announced 1,231 new cases of COVID-19, the illness caused by the coronavirus, with 18 new deaths, bringing the total number who've died in the state to 7,416 out of 172,655 confirmed infections, most involving people who have recovered.

After the state recorded fewer than 1,000 new cases a day for 34 consecutive days during June and July, the number has topped 1,000 on 14 of the past 19 days, according to state statistics.

“Things are not moving in the right direction,” Pritzker said during a stop Rock Island, where, as in Quincy earlier and Rockford later, he met with local health officials. “We have to make sure that people get the message that ... you're 80% less likely to get COVID-19."

Althought progress toward developing a vaccine against the virus is moving rapidly, Pritzker predicted during remarks in Quincy that life and social interaction will not return to anything resembling what it was before the pandemic until well into next year.