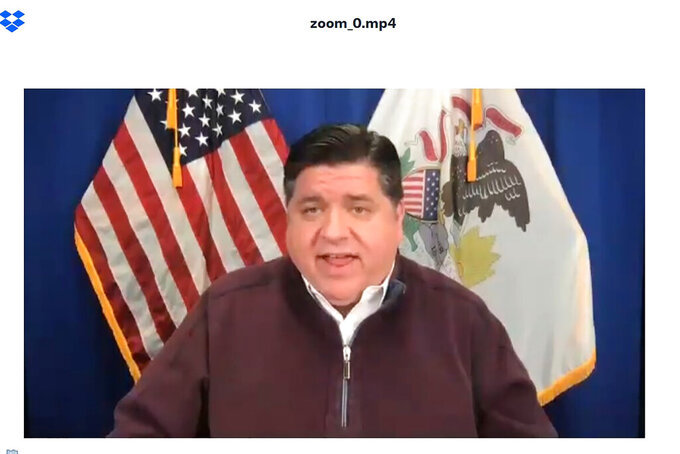 In this screengrab from video Illinois Gov. J. B. Pritzker appears during a video conference from Illinois, with other Midwestern governors Tuesday, Nov. 17, 2020. The Governors urged the public to be extra cautious if planning to gather with family or friends for holiday celebrations. The Democrat also joined with other state executives in producing a social media video, "Mask Up," to spread their message. (State of Illinois via AP)

Earlier Tuesday, Pritzker joined other Midwestern governors in a video conference urging extra caution for people planning holiday gatherings among family or friends. State leaders and health experts have agonized for weeks over the potential for explosive virus spread from indoor celebrations among guests from different households.

The governors also produced a social media video, “Mask Up,” to spread their message.

Under the newly announced restrictions, retail stores must lower customer capacity to 25% from the current 50%, though grocery stores will be excluded and can operate at 50% capacity. Gyms will also be capped at 25% and indoor classes will no longer be allowed.

The first-term Democrat stopped short of a stay-at-home order, calling it a last resort. The entire state was under such an order for six weeks last spring at the onset of the virus. -

“If these numbers don’t start to curve," he said, "then it is clear that we’re going to have to take more difficult measures and go to a stay-at-home order.”

Pritzker and other elected officials, including Chicago Mayor Lori Lightfoot, have pleaded with residents to stay home and avoid gathering with people indoors, including scrapping traditional Thanksgiving plans.

Pritzker said he will be apart from his family during the holiday and plans to spend Thanksgiving with his teenage son in Chicago while his wife and teenage daughter will stay in Florida “indefinitely.” Pritzker owns an equestrian farm in Florida.

Pritzker spelled out his family’s decision during a Tuesday briefing with reporters in Chicago where he became visibly agitated and paused to compose himself. He said his family has faced unfounded scrutiny and threats, including on social media, for not adhering to social distancing measures. Recently, an attorney who has brought lawsuits against Pritzker’s COVID-19 orders offered $1,000 to those providing footage of “Pritzker out celebrating Thanksgiving with friends and family,” according to a Facebook post.

Tuesday marked the 11th consecutive day new infections have topped 10,000, according to the Illinois Department of Public Health.

Hospitalizations also continue to rise, to 5,887 Tuesday, a 24% increase from a week ago. The spike in the most seriously ill is seen in those needing breathing assistance from ventilators. Ventilator usage was at 545 Tuesday, a 37% increase in the past seven days.

“This Thanksgiving is going to look different than others have before, and it’s because it has to,” said Whitmer, who said she will forgo her traditional large feast and instead connect with family members over online video.

Pritzker, who at times during his daily briefings has issued stern admonitions for those who skip face masks and ignore rules against large gatherings, struck a hopeful tone that people will buckle down and safely weather the critical holiday period.

"We Midwesterners are people who know how to be there for one another,” Pritzker said. “No matter which state you call home, let’s do all that we can to save lives now.”

Whitmer said Republican governors Eric Holcomb of Indiana and Mike DeWine of Ohio had planned to take part but had last-minute scheduling conflicts. Holcomb and DeWine do appear in the YouTube video.