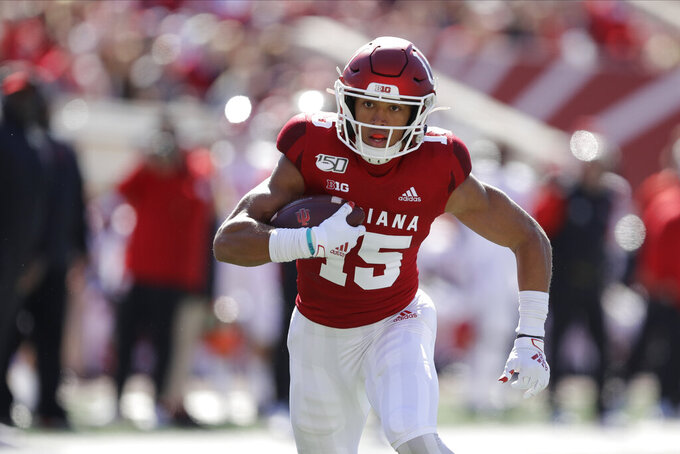 FILE - In this Oct. 12, 2019, file photo, Indiana wide receiver Nick Westbrook runs during the first half of an NCAA college football game against Rutgers, in Bloomington, Ind. Gone for the most part this year are access to in-person interviews, campus workouts and visits to team headquarters. Those who competed in college all-star games but didn't receive a combine invite, like Indiana receiver Nick Westbrook, have the advantage of performing in front of scouts. (AP Photo/Darron Cummings, File)

He studied film, relied on medical experts, checked the numbers and interviewed players.

With the flurry of pro days canceled because of the new coronavirus, the Hall of Fame executive who constructed multiple Super Bowl teams during his 32-year career believes it's time for a return to his throwback approach.

“Really all you need, and it's especially true in a time like today, you need the game film, the physical exam, which may be difficult to get right now, and the measurables," he told The Associated Press. “So if a player has been to the combine, that's all you really need. If a player hasn't been to the combine or is from a small school, then you've just got to go on the game film and you'd be slightly less accurate.

“And the people who haven't done it as long as I did are probably a little discombobulated about that right now.”

Younger scouts, front-office executives and even coaches find themselves coping with a whole new draft process with Americans hunkering down and doctors overwhelmed by the mounting cases of COVID-19.

Gone for the most part this year are access to in-person interviews, on-campus workouts and visits to team headquarters. Also gone are some of the numbers garnered at pro days that decision-makers like to crunch as they becoming increasingly reliant on advanced metrics.

That combination has forced everyone to rethink how they do business.

— Draft prospects are offering to send homemade videos of workouts and drills to NFL teams.

— Some college coaches are making a more concerted effort to sell the players who didn't get a chance to work out in front of NFL scouts.

“I feel like more of a mental health counselor than ever before because some of these kids have been so stressed out to not have the opportunity to showcase what they've worked for their whole life," said David Moreno, who represents about 10 pro prospects.

Everybody agrees that top-tier players such as Heisman Trophy winner Joe Burrow of LSU or defensive end Chase Young of Ohio State won't be hurt by the cancellations. They did enough in their college careers — and it's all on tape. Plus, they met with team officials and went through the medical checks at the NFL's annual scouting combine in Indianapolis.

Some players with medical concerns, such as Alabama's Tua Tagovailoa, the 2018 Heisman Trophy runner-up, or Colorado receiver Laviska Shenault Jr. probably won't see a precipitous drop in their stock either.

And those who competed in college all-star games but didn't receive a combine invite, like Indiana receiver Nick Westbrook, also have the advantage of performing in front of scouts.

Many others find themselves in limbo.

“I just feel horrible for all these kids that aren't combine guys and put in all this work and now they're just kind of stuck,” agent Ron Slavin said.

The stories are endless.

Slavin represents eight draft-eligible players, including Houston punter Dane Roy, who returned home to Australia for his wedding before the school's March 31 workout was called off. Roy doesn't know when he'll be back in the U.S.

Westbrook was working out in Seattle — until the pandemic started shutting down the city. So the Indiana receiver moved in with his parents in Florida but has struggled to find a workout facility.

Lehigh's top receiver, Devon Bibbens actually missed out on three pro days — two at Temple and one at Delaware. He is back home in Pennsylvania, using his old high-school regimen to stay in shape.

“I'm lucky enough that I have some equipment in my garage — dumbbells, a barbell, a pull-up bar, field equipment. My high school has a hill," Bibbens said. “These are the workouts I did in high school, so getting back to those things is honestly kind of fun."

Still, nothing can really replace missing time in front of NFL scouts. So coaches are pitching in.

Illinois was one of the few major schools to conduct a pro day before travel restrictions were imposed, so coach Lovie Smith has spent his days responding to follow-up questions.

At Georgia, coach Kirby Smart said he's been contacted personally by five NFL teams and answers text messages daily in an effort to help his players, especially those under the radar.

“The guys that didn't get to go to the combine that are really football players, I worry for them, for their sake,” Smart said. “You feel good when you go out there and you go perform, whether you perform good or bad, you feel good that you got your opportunity."

It's not just the football component that disappoints players, it's the uncertainty.

“Not knowing what's going to happen and even if the draft takes place on time, whether the minicamps start up and all those unknowns is probably the hardest thing to deal with right now," Westbrook said.

But Polian has a reassuring message for borderline prospects: NFL teams have been unearthing talent for decades — many years with no combine and no pro days.

“That's why we have scouts," he said. “They've seen the player up close and personal and can do a pretty good assessment of all the measurables and the physical. If they need additional information, I'm sure the school will give it to them. ... If you have good scouts, you're in great shape.”