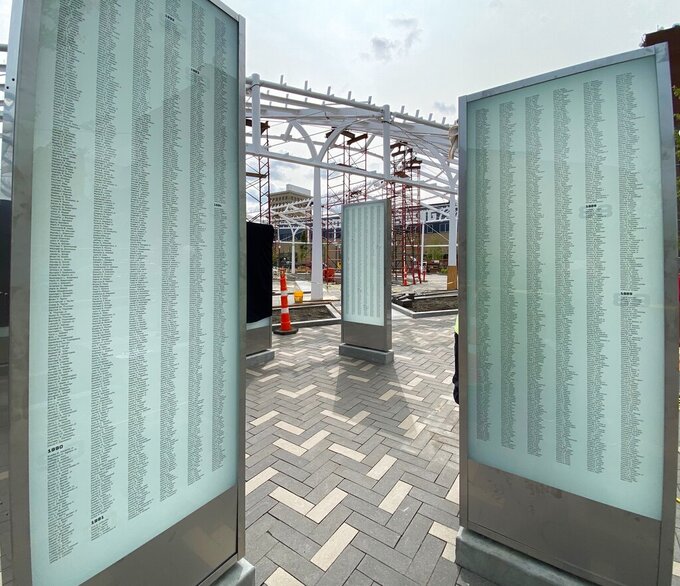 This photo provided by MKSK shows some of the 11 pylons that list every player who played a down in an NFL regular or postseason game, in Centennial Plaza under construction in downtown Canton, Ohio. Centennial Plaza, developed with the help of $12 million in funding from the citizens and businesses of Canton, will occupy a two-acre city block formerly known as Market Square. (Courtesy of MKSK/Pro Football Hall of Fame via AP)

It was going to be the “greatest gathering in football ever.” And then the coronavirus pandemic swept across America.

David Baker, president and CEO of the Pro Football Hall of Fame, makes that assessment of the planned 100th birthday celebration for the NFL. The league was born on Sept. 17, 1920, and Canton, Ohio, the home of the hall, was going to stage events a century in the making.

While those plans, including the induction of a special 2020 class, have been delayed until next August, the enthusiasm of Baker and his colleagues can't be dimmed. On Thursday night, at halftime of the Bengals-Browns game — fittingly, the “Battle of Ohio” — the hall and the NFL dedicated Centennial Plaza in downtown Canton.

“The game we all honor is a great teacher and sometimes have to call some audibles in life,” Baker says. “Sometimes we face some big adversaries.”

So thousands of fans and hundred of “Gold Jackets,” the members of the Hall of Fame, couldn't be on hand at the ceremonies. But the plaza, which honors every man who has played in the NFL and every city that has been home to a team, has no time print on it. In fact, as Baker notes, it will be everlasting.

“It is really spectacular, with spires at one end of the dome of the Pro Football Hall of Fame,” he says, "a stage at the other end with massive a big screen TV. In the middle is a huge kind of football field like an oval park and amphitheater. There's a beer garden and cafe. It has kind of a monument of pavers that represent every city that ever had an NFL team.

“And the very best part of it is the 11 pylons for each decade (of the league). We have the names of all 25,488 players who played in the first century of the NFL."

Everyone who played a down in an NFL regular or postseason game has been etched into posterity on the pylons’ surfaces.

Centennial Plaza, developed with the help of $12 million in funding from the citizens and businesses of Canton, occupies a two-acre city block formerly known as Market Square. It sits a short walk from the site of the former Hupmobile dealership where Ralph Hay, who also owned the Canton Bulldogs, organized a meeting with other owners of professional football teams that led to the creation of what has become America's most popular sport.

The Hall of Fame will schedule programming for the plaza — from viewing parties for NFL games to musical performances to nightly laser light shows synchronized with music from popular bands covering all genres.

For Baker, there's more than a sense of achievement about the plaza. There's a personal attachment.

“As we are unveiling this,” he explains, “it was pretty cool for me to see these player pylons and see the name of Sam Baker.”

His son played seven seasons for the Atlanta Falcons.

“As much as I do this for the Hall of Fame, David Baker says of his various roles dealing directly with players, "it was actually emotional for me to see. I remember him as a young guy dreaming of paying pro football, and then playing in high school and how hard he had to work. And then at USC and playing for Pete Carroll. And then to be drafted in the first round, and playing in an NFC championship game.

“To see his name there — that will forever be preserved as part of the first century of the league.”