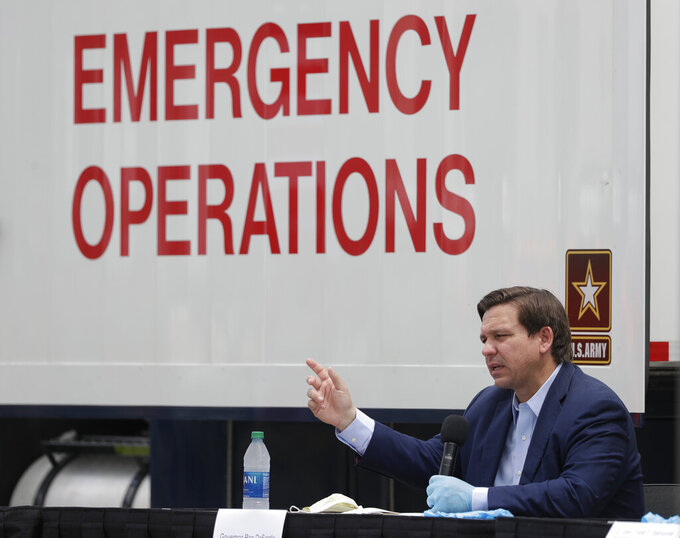 Florida Gov. Ron DeSantis, gestures as he speaks during a news conference in front of a U.S. Army Corps of Engineers mobile command center at the Miami Beach Convention Center, Wednesday, April 8, 2020, in Miami Beach, Fla. The Corps of Engineers will transform the newly renovated facility into a hospital by April 27, news outlets reported Tuesday. (AP Photo/Wilfredo Lee) 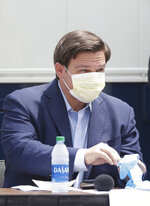 Now it is filled around-the-clock with members of the Army Corps of Engineers performing the grim task of setting up a 450-bed overflow hospital in case South Florida facilities become overwhelmed with coronavirus patients.

Gov. Ron DeSantis visited Wednesday, saying the corps assured him it would be ready by April 21, when models show the disease could be nearing its statewide peak. He said the hospital could be expanded to hold 1,000 beds if needed.

“I would rather be prepared for the worst and the worst not come here than not be prepared,” DeSantis said. “We don’t know what a surge may bring.”

As of Wednesday, almost 15,700 cases had been diagnosed statewide and more than 2,000 people were hospitalized. There have been 322 deaths. A widely cited University of Washington model shows Florida will nearly fill its 1,700 intensive care unit beds in about 10 days, and that about 150 people will die daily.

The Florida National Guard has also set up four mobile hospitals elsewhere in the state in case they are needed.

Lt. Gen. Todd Semonite, who runs the corps, said his engineers have learned a lot setting up similar operations in New York City, Detroit and Chicago. The convention center is being divided into 100-square-foot (9-square-meter) rooms, with the ICU rooms covered in clear plastic so there is negative pressure to prevent the virus's spread. The state is hiring doctors, nurses and other support staff to run the hospital. They will be supplemented by National Guard medical personnel.

Semonite said the Miami Beach facility is one of 17 being built nationwide for a total of 15,000 beds. He said in addition to patient rooms, each facility must have nurses stations, showers, intake and checkout areas, break rooms for the workers, places to store protective gear, and other requirements.

Miami Beach Mayor Dan Gelber said his city is one of the worst places for social distancing — its economy is based on tourism drawn by its convention center, nightclubs, restaurants and beaches. All are usually packed, but have been closed for weeks.

“Things are much different right now. Just as we are great at (tourism) we have to be great at this,” he said about the temporary hospital.

DeSantis said Wednesday that he wants the state's problem-plagued unemployment system to give retroactive payments to those who lost jobs more than a week ago but couldn't file for assistance when the state's computer system crashed under a tsunami of applications.

Others had no access to computers, so the state is also setting up a system to distribute and receive paper applications. Benefits are usually calculated from the date the application is filed.

“If someone was trying to apply last Wednesday and the system wasn't really working, you should count that as the day,” DeSantis said.

Also on Wednesday, DeSantis signed an executive order delaying municipal elections in Pasco County. Supervisor of Elections Brian Corley had requested the elections scheduled for next Tuesday in San Antonio, Dade City and Zephyrhills be postponed. A new date has not been set.

For most, the virus causes mild to moderate symptoms such as fever and cough. But for some older adults and the infirm, it can cause pneumonia and death.

In Broward County, detectives were investigating the death Tuesday of a county jail inmate who was hospitalized after testing positive for COVID-19. The elderly inmate was arrested last month, according to a sheriff’s office news release. He tested positive for the coronavirus on April 1. Detectives said the inmate suffered from preexisting medical conditions. An autopsy will determine an official cause of death.