Promoter: Sex toy sponsorship was too racy for curling crowd 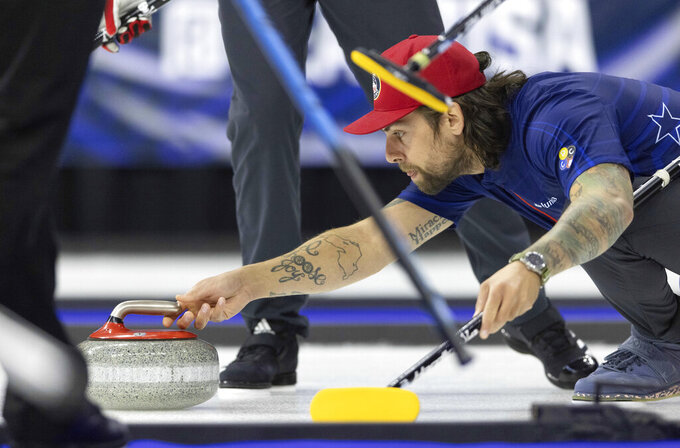 A Dutch sex toy company’s attempt to reach fans of the wholesome sport of curling led some broadcasters to cancel their livestream of a tournament that will determine the final spots in the Beijing Olympics.

Local organizers of the Olympic Qualification Event in the Netherlands said they were told that on-ice ads with the EasyToys name and nonexplicit logo were too much for the U.S. audience. Dutch media reported that the livestream was also canceled in Japan.

“I’m not the right man to have an opinion what is normal in which country,” promoter Dagmar van Stiphout told The Associated Press. “I think they’re also surprised, but it’s best to ask them.”

USA Curling tweeted on Sunday that video of the Americans' opening-round match was not available due to “an unforeseen sponsorship conflict with the local organizing committee.” The national governing body said NBC was working with organizers on a solution.

An NBC spokesman did not immediately respond to a question seeking an explanation for the decision. EasyToys, a sexual paraphernalia website that bills itself as “the market leader in the Netherlands and Belgium,” could not be reached for comment.

While the bulk of the men's, women's and mixed doubles Olympic curling fields have already been filled, the tournament to determine the final spots in Beijing began on Sunday in Leeuwarden, about 90 minutes north of Amsterdam. Fourteen teams, including the American pair of Chris Plys and Vicky Persinger, were competing for the final two coed berths in the Winter Games.

But Americans seeking the livestream on the World Curling Federation website instead found a message that the broadcasts were suspended due to “an ongoing sponsor rights issue.” In videos tweeted by the WCF and elsewhere, the EasyToys ads could be seen in four spots on the playing surface, and its name was printed along the hog line that determines where curlers must let go of the stone.

Van Stiphout told the AP that organizers informed the WCF of its sponsorship agreements a few weeks ago.

WCF spokesman Christopher Hamilton told the AP on Monday that organizers were investigating “a number of solutions to resolve our broadcast partner policy complications surrounding sponsor agreements and usage.” USA Curling President Jeff Plush did not immediately respond to an email seeking comment.

Persinger and Plys won their first three matches of the round-robin and were tied with South Korea atop the group standings. The mixed doubles competition concludes Thursday, with the final two teams earning a spot in the Beijing field.

“Of course it’s a pity that it’s happening now,” van Stiphout said. “We will go on with the tournament. We do it for the athletes. We’ll carry on with the event.”