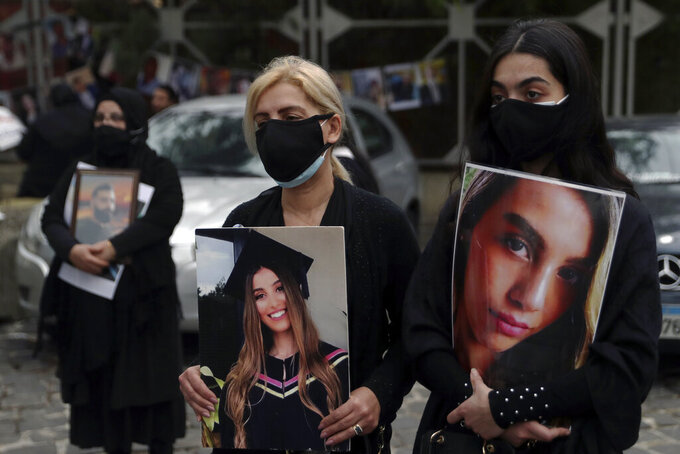 Relatives of the victims of the Aug. 4, 2020 Beirut port explosion hold portraits of their loved ones who were killed, Thursday, Feb. 4, 2021 in Beirut, Lebanon. The vigil at the seaport main entrance, marked six months since the blast that killed more than 200 people and injured thousands. The Arabic words on poster read "Who brought nitrates and for who? We have a right to know." (AP Photo/Bilal Hussein)

BEIRUT (AP) — The prosecutor investigating last year’s massive explosion at the port of Lebanon’s capital has summoned several people, including a former army commander, for questioning in the case, judicial officials said Monday.

The questioning marks the resumption of Judge Fadi Sawwan’s investigation into the explosion after nearly a two-month pause following legal challenges to his authority. The summonses came as Lebanon began easing a strict 25-day nationwide lockdown that included a curfew to try to limit the spread of the coronavirus.

State-run National News Agency said Sawwan has set appointments to hear witnesses and others charged in the Aug. 4, explosion of nearly 3,000 tons of ammonium nitrate, a highly explosive material used mostly as a fertilizer.

The blast, one of the largest non-nuclear explosions in history, killed 211 people, injured over 6,000 and damaged entire neighborhoods in the capital Beirut.

Among those summoned for questioning by Sawwan is former army commander Gen. Jean Kahwaji, judicial officials said. The officials, who spoke on condition of anonymity in line with regulations, said Kahwaji will be questioned as a witness.

The names of the others to be questioned have not been released.

The army command, when Kahwaji was in charge, was one of the entities that exchanged letters with the customs department on what to do with the ammonium nitrate as it was kept in a warehouse at the port for six years until it blew up.

In April 2016, the army said in a letter that it didn't need the material, adding that if a private explosive company in Lebanon also didn't need it, the material should be exported at the expense of the ship owner who brought it to Lebanon.

Nearly 30 people, most of them port and customs officials, have been arrested since the blast.

In December, Sawwan filed charges against caretaker Prime Minister Hassan Diab and three former ministers, accusing them of negligence leading to the deaths of hundreds of people.

Diab and the three former ministers did not show up for questioning following the charges.

The summoning of Diab sparked concerted criticism from most of Lebanon’s top politicians and the militant Hezbollah group, which urged Sawwan to reconsider his decision after describing it as politically motivated.

Sawwan paused his investigation to allow him to respond to accusations that he violated legal and constitutional procedures by summoning Diab and the former ministers.

Earlier on Monday, dozens of protesters shut down a major square in the southern city of Sidon demanding the government allow businesses to open, arguing people cannot afford to stay home as the country's crippling economic and financial crisis worsens.

Despite the easing of the nearly four-week lockdown, a nationwide curfew remains in place for the next two weeks and people who want to go out will need permission.

Among the sectors that re-opened Monday were supermarkets and groceries and businesses related to agriculture, poultry, meat and milk production.

The coronavirus has battered Lebanon’s already crumbling economy that shrank about 20% last year and tens of thousands have lost their jobs.

Lebanon, a tiny nation with a population of more than 6 million, including 1 million Syrian refugees, has registered nearly 320,000 cases of coronavirus and 3,616 deaths.

In Beirut, protesters clashed with riot police outside the Military Court demanding the release of 17 activists detained last month in north Lebanon. Rioters set fire to several government buildings in Tripoli capping days of violent clashes as anger over growing poverty made worse by the lockdown boiled over.