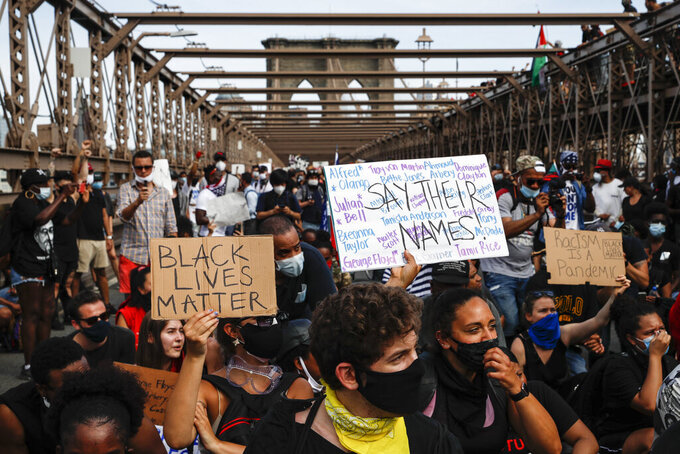 Protesters take a knee before continuing their march on the Brooklyn Bridge after attending a memorial service for George Floyd, on Thursday, June 4, 2020, in the Brooklyn borough of New York. Floyd, an African American man, died on May 25 after a white Minneapolis police officer pressed a knee into his neck for several minutes even after he stopped moving and pleading for air. (AP Photo/John Minchillo)

NEW YORK (AP) — A wave of arrests in the New York City protests over the death of George Floyd has strained the criminal justice system and ignited a debate over whether bail reforms have allowed smash-and-grab looters to get off easy.

So far, there have been well over 2,000 arrests in the past week as police sought to impose order across the city. Public defenders say too many of those arrested have been detained for too long in cramped and unsanitary conditions while authorities figure who should receive summonses for minor violations and go free, or be charged in criminal complaints and face arraignments done remotely because of the outbreak.

The backlog prompted The Legal Aid Society to file a lawsuit earlier this week demanding that the New York Police Department release people held in violation of a requirement to get them in front of a judge within 24 hours — a situation that one defense lawyer said “appears to be designed to retaliate against New Yorkers protesting police brutality.”

The NYPD and court system are “working within the confines of a pandemic and now suddenly called upon not only to secure orderly protesting, but also to address rioters who are committing burglaries, destroying private property, and assaulting fellow New Yorkers,” Miller said in a statement.

On Thursday, Judge James Burke sided with the city, saying there could be exceptions to the 24-hour rule because of logistical challenges caused by what he called “a civil unrest crisis within the overarching Covid-19 crisis.”

“The prosecution of protestors charged with these low-level offenses undermines critical bonds between law enforcement and the communities we serve,” Vance said.

After the NYPD arrested more than 1,800 people demonstrating at the 2004 Republican National Convention, a state judge ordered the release of more than 550 who had not seen a judge. Another 400 cases were later dismissed based on videotape evidence that contradicted the original charges.

In 2014, the city agreed to pay nearly $600,000 to a group of Occupy Wall street protesters to settle a civil right case accusing police of arresting them for “expressing their views.”

During the current unrest, police have arrested hundreds of alleged looters — a subset described as opportunists not connected to the peaceful protest movement — on burglary charges accusing many of raiding high-end retail outlets in Manhattan shopping districts like SoHo. Vance vowed this week to target the offenders for “aggressive prosecution.”

But arraignment information on a sampling of the Manhattan cases from earlier this week show most defendants were charged with third-degree burglary, a lesser offense that has resulted in their release under a new state law that does away with cash bail for most misdemeanors and nonviolent crimes.

The defendants included a woman whom police say was caught taking $2,000 of merchandise from an Ugg store and a man caught rummaging through a Dolce & Gabbana boutique. An exception was a man held on bail after he was charged with second-degree burglary alleging a police officer suffered injuries while arresting him.

Police officials have suggested that people who get released will do it again. Gov. Andrew Cuomo also weighed in this week, saying prosecutors “should charge these looters — they should charge them with (second-degree burglary), and they should be held and set bail.”

On Twitter, a spokesman for the Manhattan district attorney’s office said in most cases, there wasn’t enough evidence to support the more serious burglary charge. The tweet cited a statement by the District Attorneys Association of New York saying just because someone used a brick or hammer to smash windows isn’t grounds to bump up the charge unless those objects “are used in a way that would cause serious physical injury to someone on the other side.”