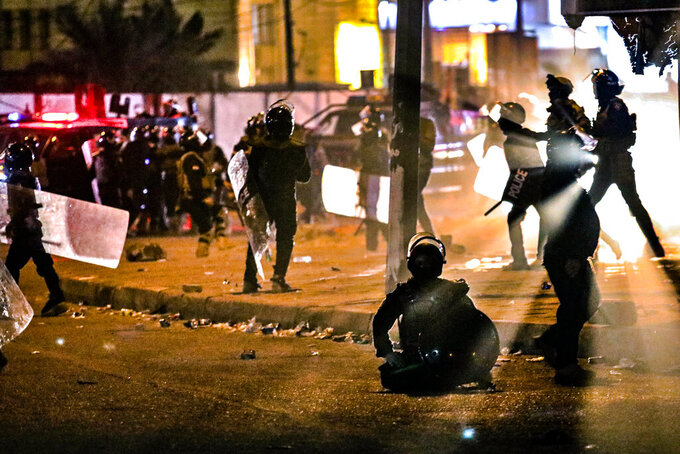 BASRA, Iraq (AP) — Iraqi security forces opened fire during clashes with hundreds of protesters in the southern city of Basra on Friday, killing one demonstrator and wounding several others as tensions flared once again, hospital officials said.

The clashes erupted after some of the protesters tried to set up tents in a public square, a week after similar, previously erected protest tents in Basra and Baghdad had been removed.

Dozens of young Iraqis were seen running away in panic after the shots were fired in Basra. The slain protester was identified as Omar al-Thiabi, a 29-year-old unemployed Iraqi.

Last Saturday, Iraqi forces cleared out sit-in tents from Baghdad's central Tahrir Square that had been the epicenter of anti-government mass protests that erupted last year. They also removed tents in Basra's Bahriya Square and in other southern cities that have seen major protests throughout the past year.

The removal of the tents has led to tensions and protesters in Basra have been trying to erect them again, holding demonstrations in the city for the past three days. They are also demanding the sacking of the governor and an investigation into previous killings of protesters.

The hospital officials said seven protesters were wounded in Friday's clashes. They spoke on condition of anonymity in line with regulations.

More than 500 people were killed during the months-long protest movement that began in October 2019 in Baghdad and across the mainly Shiite south, many of them demonstrators shot by Iraqi security forces.

Despite reaching unprecedented numbers in late 2019 and successfully mounting pressure on the country's elites, the anti-government protests have been largely dormant in the wake of the coronavirus pandemic. Activists also blamed the drop in numbers on a violent crackdown by Iraqi security forces and militia groups, as well as kidnappings and targeted assassinations.