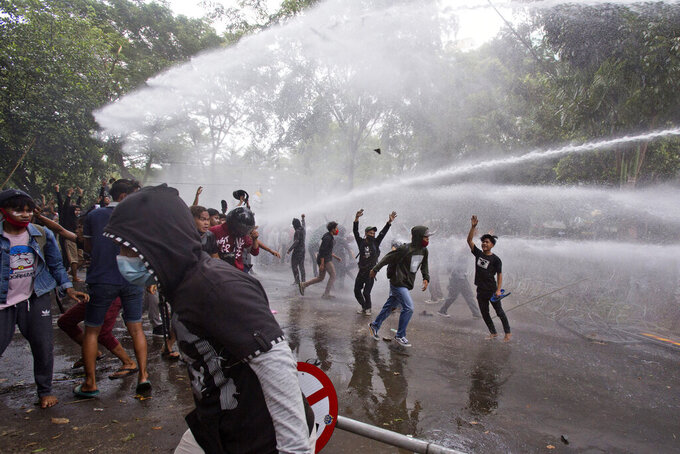 Protesters react as police use a water cannon to disperse them during a rally against a controversial bill on job creation in Medan, North Sumatra, Indonesia, Thursday, Oct. 8, 2020. Thousands of enraged students and workers staged rallies across Indonesia on Thursday in opposition to the new law they say will cripple labor rights and harm the environment. (AP Photo/Binsar Bakkara)

JAKARTA, Indonesia (AP) — Protests in many Indonesian cities turned violent Thursday as thousands of enraged students and workers criticized a new law they say will cripple labor rights and harm the environment.

Clashes between rock-throwing demonstrators and riot police broke out near Jakarta's presidential palace as police tried to disperse the protesters, including workers and high school and university students.

President Joko Widodo is visiting Central Kalimantan province and was not in the palace.

Police fired tear gas at the protesters from several high schools and universities as they tried to approach the palace compound, turning roads into a smoke-filled battleground. The protesters hurled rocks and bottles.

Flanked by the military chief and other top leaders, Mahfud said that those acts are insensitive to the conditions suffered by people who are struggling against COVID-19 and financial difficulties.

“For this reason, for the sake of order and security, the government will take a firm stand against anarchist actions aimed at creating chaos and fear in society,” he said, “The government to carry out legal proceedings against all perpetrators and actors who ride on these anarchist and criminal actions.”

Similar clashes occurred in large cities all over the country, including Yogyakarta, Medan, Makassar, Manado and Bandung.

Organizers have called for a three-day national strike starting Tuesday demanding that the government revoke the legislation.

The Job Creation Law approved by Parliament on Monday is expected to substantially change Indonesia’s labor system and natural resources management. It amended 79 previous laws and was intended to improve bureaucratic efficiency as part of efforts by Widodo’s administration to attract more investment to the country.

The demonstrators say the law will hurt workers by reducing severance pay, removing restrictions on manual labor by foreign workers, increasing the use of outsourcing, and converting monthly salaries to hourly wages.

“We vow to continue returning to the streets until the new law is revoked,” said Andi Khiyarullah, a protest organizer from the Indonesia Alliance’s student executive body.

“They have been provoked by invitations on social media to create a riot in Jakarta,” Yunus said.

National COVID-19 task force spokesperson Wiku Adisasmito expressed concern about the virus spreading in the crowds of protesters, who stood close together in images from the scenes, many of them without masks.

“We remind you that we are still in a pandemic condition, there is a public health emergency,” he said.

The government reported Thursday that Indonesia's total coronavirus cases have risen to 320,564, including 11,580 deaths, which is the highest death toll in Southeast Asia. Cases in Jakarta alone stood at 83,372 with 1,834 deaths.

Indonesia, Southeast Asia’s largest economy, is eagerly courting foreign investors as key drivers of economic growth in a nation where nearly half the population of 270 million is younger than 30.