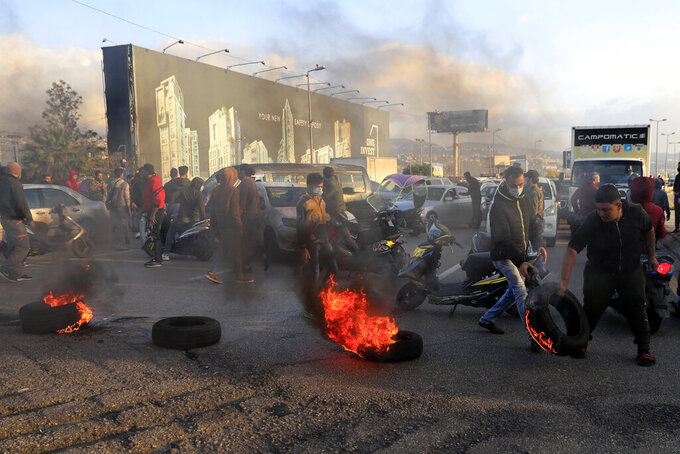 Protesters set burning tires on fire to block a highway that leads to Beirut's international airport, during a protest against against the economic and financial crisis, in Beirut, Lebanon, Tuesday, March 2, 2021. The Lebanese pound has hit a record low against the dollar on the black market as the country's political crisis deepens and foreign currency reserves dwindle further. (AP Photo/Hussein Malla)

BEIRUT (AP) — Protests broke out across the country Tuesday after the Lebanese pound hit a record low against the dollar on the black market, a sign of deepening multiple crises and no prospects for a new Cabinet in sight.

The crash in the local currency that has resulted in a sharp increase in prices led to the outbreak of small protests in a number of cities around the country. In some, demonstrators blocked roads with burning tires.

Several major roads were closed, including in the capital Beirut, where the highway leading to the international airport was briefly closed before soldiers reopened it. Roads were also closed in the northern city of Tripoli and in Sidon, Lebanon's second and third largest cities.

After sunset, more protesters poured into the streets and closed the main highways that link Beirut with the country's north, south and the eastern Bekaa Valley.

“There is no way to get back our dignity other than the street,” a protester in Beirut told a local TV station. Many of the protesters put on masks amid an increase in cases of coronavirus. The health ministry reported Tuesday 3,098 new cases and 62 deaths despite a weekslong lockdown.

A lack of hard currency has also led to delays in the arrival of fuel shipments, leading to more extended power cuts around the country, in some areas reaching more than 12 hours a day.

Lebanon has been hammered by one crisis after another, starting with the outbreak of anti-government protests against the country’s corrupt political class in October 2019. That has been compounded by the coronavirus pandemic and a massive blast in Beirut’s port last August that decimated the facility.

In neighboring Syria — where the economy has been ravaged by the 10-year conflict, corruption and Western sanctions — the dollar also hit a record on Monday, reaching nearly 3,900 Syrian pounds. The economies of the neighboring countries are connected. Many Syrians have had their money blocked in Lebanese banks that have implemented harsh capital controls.

The massive blast at Beirut’s port last August, when nearly 3,000 tons of ammonium nitrate detonated, killed 211 people and injured more than 6,000. Large parts of the Lebanese capital were badly damaged in the blast.

Prime Minister Hassan Diab’s government resigned six days after the Aug. 4 blast, one of the largest non-nuclear explosions in history. In October, former Prime Minister Saad Hariri was named to form a new Cabinet but nearly five months later, disagreements between him and President Michel Aoun on the shape of the Cabinet has stood in the way of a new government's formation.

Lebanon has also been in desperate need for foreign currency but international donors have said they will only help the country financially if major reforms are implemented to fight widespread corruption, which has brought the nation to the brink of bankruptcy.

The drop in the value of the Lebanese pound also came after an end of February deadline for the country's banks to raise their capital after they were hit hard by the crisis. Local media reports hinted that some lenders had to collect hard currency from the black market, increasing demand for the greenback over the past days ahead of the Feb. 28, deadline.

“The dollar is equal to 10,000 pounds. People are hungry, prices are flying and there is no electricity,” tweeted Lebanese business writer Hala Saghbini. “We want a government immediately. Enough humiliation of the people.”

The crash in the local currency will throw more people into poverty. In Lebanon, the minimum wage is 675,000 pounds, or about $67 a month. Before the protests broke out in 2019, the minimum wage was about $450 per month.

The crisis has driven nearly half the population of the small country of 6 million into poverty. Over 1 million refugees from Syria live in Lebanon.

In December, the World Bank warned that Lebanon’s economy faces an “arduous and prolonged depression,” with the gross domestic product projected to plunge by nearly 20% because its politicians refuse to implement reforms that would speed up the country’s recovery.

In March last year, Lebanon defaulted for the first time ever on a payment on its massive debt amid ongoing popular unrest. Lebanon’s debt reached $90 billion or 170% of GDP, making it one of the highest in the world.