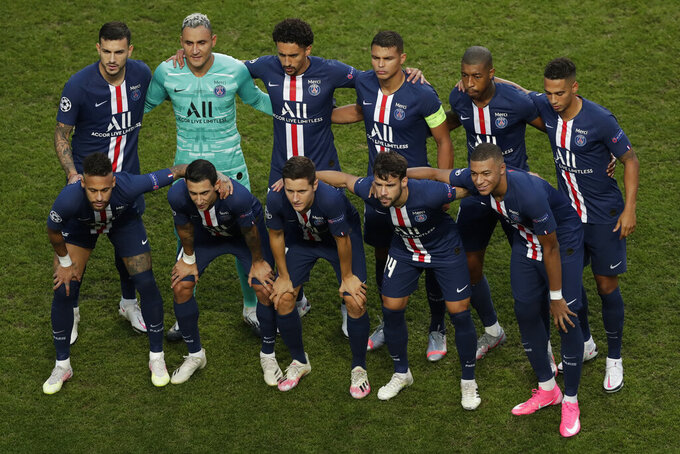 PARIS (AP) — Facing a major headache to build a competitive side for his team's French league opener, Paris Saint-Germain coach Thomas Tuchel is asking for patience.

After its loss to Bayern Munich in the Champions League final last month, PSG returns to domestic duties Thursday with a tricky game at Lens, missing seven important players including Neymar and Kylian Mbappé.

The pair has been ruled out alongside Keylor Navas, Mauro Icardi, Angel Di Maria, Leandro Paredes and Marquinhos. All seven players have tested positive for COVID-19.

“It’s a bit weird to start with a very difficult game in Lens," Tuchel told a videoconference Wednesday. “It will be very hard."

The game comes just 18 days after the Champions League final, he noted.

“It’s important that we play in a humble and serious way, but that people don’t expect too much from us," Tuchel said.

Mbappé aside, the other six players who tested positive were part of a recent holiday trip to Ibiza in Spain, which was authorized, following the club’s defeat to Bayern on Aug. 23. In order to make that trip possible, PSG’s opening league game of the new campaign — initially scheduled for Aug. 29 at Lens — was pushed back to Sept. 10, drawing strong criticism from Lens fans.

In the absence of so many PSG stars, the northern side now has its best chance to end a nine-match winless run against the French champions. Back in the topflight this season, Lens lost its opener 2-1 at Nice.

“I’m happy to be playing again and to be taking on the Champions League finalists, even if they won’t have all their players," Lens coach Franck Haise said. “Do you want me to say we are favorites? No, we are not favorites. We are up against PSG, even if they won’t be at full strength. There’ll still be plenty of fine players at PSG and we know it will be very difficult in any case.”

Tuchel said he could bring up some members of the U19 team. Asked whether some of the players sidelined by the virus could return to face bitter rival Marseille at home on Sunday, Tuchel did not sound too optimistic.

“Maybe some of them can return with the team on Friday or Saturday, then we'll see," Tuchel said. “The most important thing is to be very, very responsible and careful."