PSG's league campaign in trouble after rocky start to season 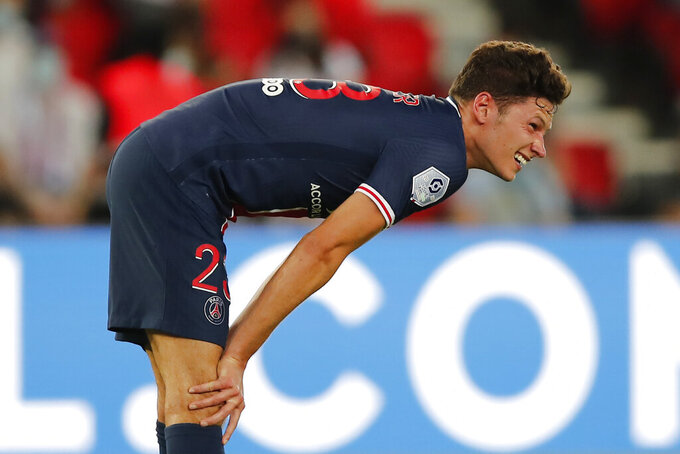 PARIS (AP) — Having been within touching distance of the European crown it so craves, and invested so much money to achieve, Paris Saint-Germain's league title defense is in danger of slipping off the rails.

Only weeks ago PSG stood 90 minutes away from joining Marseille as the only French club to win the Champions League. But PSG lost 1-0 to Bayern Munich, and the club has been in freefall since as problems have piled up amid a lack of authority and poor discipline.

What triggered a sequence of baffling events was a much-criticized yet club-approved decision to allow star players to jet off to Ibiza for a few days off after the Munich defeat.

In order to do so, PSG had obtained permission from the league to push back its game against Lens in the French league from Aug. 29 to Sept. 10, following the international break.

But six players, including Neymar, Ángel Di María and new captain Marquinhos, came back from Ibiza and tested positive for the coronavirus, while striker Kylian Mbappé contracted it on duty with France's national team.

It meant that none was available for the Lens game, which PSG lost 1-0 in a match where coach Thomas Tuchel had to pick two 18-year-olds in attack.

A few days prior to the match, PSG's sporting director Leonardo made a rare televised appearance. He defended the need for the players to go to Ibiza, despite coronavirus concerns being high in the Spanish holiday resort.

“Every team has had positive cases, but positive cases for Paris are a scandal,” Leonardo said on Canal Plus television. “All the football players went to Ibiza, those of Bayern also.”

But Bayern's league season doesn't begin until Friday, much later than PSG's when taking into account any potential positive virus cases.

PSG was taking a risk allowing its players to leave, especially considering its title defense started with three games in seven days and that one of those was Sunday's showdown against bitter rival Marseille.

Neymar and Angel Di Maria returned for that game after recovering from the virus, but had little time to prepare for the biggest league game of the season. PSG lost 1-0 to an opportunist Marseille side which held its nerve to secure its first win over PSG in nine years.

Tensions frayed and fighting broke out at the end, with Neymar among three PSG and two Marseille players sent of f.

The chaos resulted in three-match bans for Neymar — who claim he was racially abused by Marseille's Álvaro González — and midfielder Leandro Paredes. Left back Layvin Kurzawa got six matches having been at the center of the fighting.

They were all suspended for Wednesday's league game against a struggling Metz side which almost created an upset only to lose 1-0 to a stoppage-time goal.

“This will be an exceptional memory for us,” Tuchel said after scraping a win in the 93rd minute. “We’re playing without training against strong sides.”

Such post-game comments sound barely credible considering Metz has lost all league three games so far without scoring a goal.

Tuchel was forced into yet another team re-shuffle and has used 25 players in three games so far, more than any other side in the league. And now he has a major injury to add to his mounting problems.

Left back Juan Bernat faces a long spell out of the side after tearing a ligament in his left knee against Metz. But with Kurzawa suspended for another five games, Tuchel has no recognized left back for the lunchtime match at Nice on Sunday.

Nice is coached by Patrick Vieira, and he has shaped his side into how he was as a standout player for France, Juventus, Inter Milan and Arsenal: a combination of power, poise, nous and discipline.

It's arguably the last side PSG wants to be facing given the current situation.