In public housing, a small debt can get poor tenants evicted 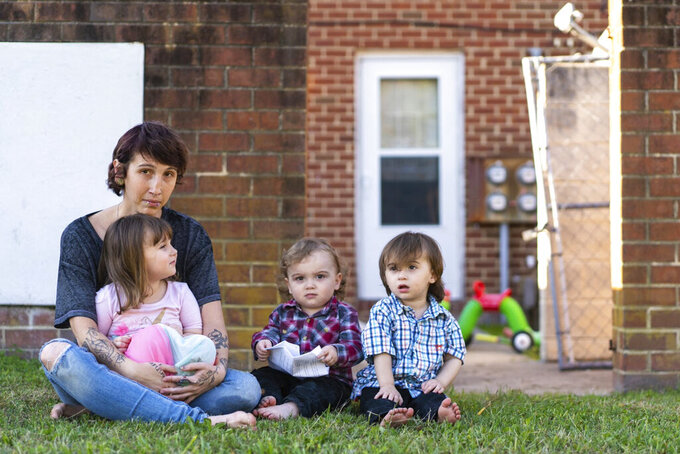 Kandise Norris, shown here with her three children in a Nov. 7 photo outside their home in Somerset County, Maryland, says she has been rebuilding her life since getting treatment for drug addiction in April 2019. The Housing Authority of Crisfield, Maryland, which owns her house, has filed three eviction cases against the 30-year-old since September. (Nick McMillan/Howard Center for Investigative Journalism via AP)

CRISFIELD, Md. (AP) — Public housing is supposed to be a solution to homelessness, not a cause of it.

But in Crisfield, a city of 2,600 on the Chesapeake Bay, the housing authority is one of the leading eviction filers. It files cases against tenants so often that officials hired a contractor to automate the process.

The work of the Howard Center for Investigative Journalism is supported by grants from the Scripps Howard Foundation and the Park Foundation. The center, located in the Philip Merrill College of Journalism at the University of Maryland, honors the legacy of journalism pioneer Roy W. Howard.

The Howard Center for Investigative Journalism analyzed four years of eviction data for Crisfield and four other public housing authorities with aggressive filing records — in Minneapolis; Oklahoma City; Charleston, South Carolina; and Richmond, Virginia — to find out why these important anti-poverty agencies are taking so many of their clients to court.

Late rent payments were by far the leading reason they sought to evict tenants. In some cases, the debts were so small that it cost the agency more to file the case than was owed.

Diane Yentel, the president and CEO of the National Low Income Housing Coalition, said public housing is “meant to accommodate people who are having difficulty paying their rent, because they have very limited incomes to begin with.’’

But the program has been underfunded by Congress for decades, leading some housing authorities to adopt unyielding approaches to rent collection so they can sustain their operations.

Yet for the tenants, many of them single parents with young children, it’s not that simple.

In Crisfield, Tawna Thomas, 26, said she cobbled together the cash to stave off court proceedings for her first eviction filing in 2018 — not long after losing a pregnancy and a job. But that didn’t solve the bigger problem.

Each month brought fresh worries about how to pay her $138 rent, she said. Thomas, the mother of a 5-year-old, received five eviction filings in an 18-month period, according to court records. Although she hasn’t been served an eviction notice in 2020, she said she worries that day is coming. Especially when the sheriff’s vehicle rolls up.

“My heart starts fluttering every time,” Thomas said. “What if he has a paper for me? How am I gonna pay this?”

Federal and state restrictions during the pandemic have temporarily slowed but not halted the pace of rent-related eviction filings, records show. They place the onus on tenants, who typically lack legal representation, to prove they can’t pay due to COVID-19.

Some housing authorities use the courts like collection agencies, putting pressure on clients to pay up. The Howard Center data analysis found many tenants with multiple eviction filings in the same year.

This practice piles court costs, late fees and interest onto what families already owe in rent.

Maryland Attorney General Brian Frosh assailed such use of eviction court. In a Dec. 11 op-ed in The Baltimore Sun, he said he would ask the state legislature to increase the filing fee from $15 — one of the lowest in the country — to at least $120, the national average.

Martin Wegbreit, the director of litigation at the Central Virginia Legal Aid Society, said use of eviction filings “as a collections tool … against financially struggling tenants simply is indefensible.”

The U.S. Department of Housing and Urban Development doesn’t keep national statistics on how often housing authorities evict, but frequent filings are not uncommon.

The Howard Center picked a handful of local agencies to assess where availability of court records made analysis possible. All are located in communities with high homeless rates, high historical eviction rates or high rents compared to average incomes.

These five, which manage more than 14,500 units, took tenants to eviction court more than 11,400 times from 2017 through 2020, resulting in the courts authorizing removal of at least 2,500 households.

Record-keeping on evictions differed for each housing authority examined. Here is what the Howard Center found:

— The Richmond Redevelopment and Housing Authority, with 3,572 public-housing units, took tenants to court more than 4,100 times. The housing authority won judgments in 2,075 of those cases — one in six of which was over debts of less than $100. The filings included tenants who had paid their rent in full but owed the agency for other things, such as maintenance, repair and late fees. The authority was using tenants’ rent money to pay off those other claims first. That caused them to fall in arrears on their rent. After advocates challenged the practice, officials agreed in November 2019 to halt evictions while they reviewed and changed their policies. The moratorium remains in place.

— The Minneapolis Public Housing Authority, which owns and operates nearly 6,000 low-income housing units, is its county’s largest landlord and a leading eviction filer. It initiated 1,087 eviction cases for nonpayment of rent, accounting for 87% of its filings. The agency says two-thirds of cases end in payment agreements at court that allow tenants to stay. But legal advocates say the authority is using the court to pressure tenants into boilerplate payment plans they often can’t afford.

— The Housing Authority of the City of Charleston manages 1,753 units and averages nearly 1,200 eviction filings each year, making it one of its county’s leading eviction filers. It’s common for the housing authority to file multiple eviction cases against the same tenant year after year, and at times within months of each other. Three tenants each had 16 cases against them since 2017, with filings every few months.

— The Oklahoma City Housing Authority, with 2,913 public-housing units, filed more than 600 cases, resulting in more than 500 households being forced out. More than half were rent-related. In 2018, the agency started a resident-services division to connect tenants with community resources such as rental assistance. Nonpayment filings dropped by more than 50% from 2017 to 2019.

— The Housing Authority of Crisfield has filed 1,756 eviction cases since 2017, all for failure to pay rent. The annual count more than tripled from 2017 to 2019, after a contractor set up an automated system that files against tenants each time they’re late on rent. Although the records are not clear on the outcomes, they indicate that approximately 50 households were forcibly removed. Most settled up or left on their own.

Officials at these agencies echoed Bibb’s view that tenants have a duty to pay rent and evictions are a necessary enforcement measure.

“The landlord should expect payment as well as proper care of the premises,” said Donald Cameron, president and CEO of the Charleston Housing Authority.

In Minneapolis, “filing for eviction is an extremely costly, distracting, difficult process for the housing authority,” said Jeff Horwich, the agency’s policy and communications director. But court is the only official place to address nonpayment of properly calculated overdue rent, he said.

Legal advocates say the housing authority should be doing more to avoid the harm that eviction filings can cause tenants. Even a filing that is dropped or resolved creates a record that makes it extremely difficult to rent other housing.

On paper, local housing agencies have policies to protect tenants when they’re in financial distress. Those with little or no income can pay a minimum rent of up to $50 and, in extreme hardships, can ask to temporarily forgo paying even that.

In practice, however, many tenants don’t know that’s an option.

That was the case for Margaret Szabo, a 42-year-old mother of two who lives in a Richmond public-housing complex. She said she patches together money through a collection of odd jobs, from babysitting to helping people prepare their taxes. When she moved in, the housing authority set her rent at $50.

Between spring and fall of 2019, Szabo fell about $300 behind on rent. She said she didn’t know she could apply for a hardship exemption, and eviction papers were posted to her door that October. When she went to court, an aid organization paid her bill, she said.

After lobbying from Wegbreit’s group, the Richmond Housing Authority agreed to include information on the hardship exemption in late-rent letters when its eviction moratorium ends.

NO CUSHION FOR COMPASSION

The five local agencies investigated by the Howard Center are part of a national network of 3,300 housing authorities that receive billions in federal aid each year to provide nearly a million low-income units.

Federal regulations cap the monthly rents housing authorities can charge at 30% of tenants’ incomes. On average, these households earn about $15,000 per year, according to HUD data. A quarter of them make between $5,000 and $10,000.

The mission of public housing is preventing people with low incomes from falling into homelessness. But financial pressures have made it increasingly difficult for local agencies to carry out this task.

Congress has consistently underfunded public housing in recent decades, resulting in a renovation backlog of $26 billion.

That leaves housing authorities with no cushion for compassion, especially when it comes to collecting rent.

But Kandise Norris, a Crisfield mother of three who faces potential eviction, said she wishes officials would do more to understand tenants’ struggles.

“It’s not fair to come after the low-income (people) that only live off a little bit of money, that are barely bobbing above the water,” she said.