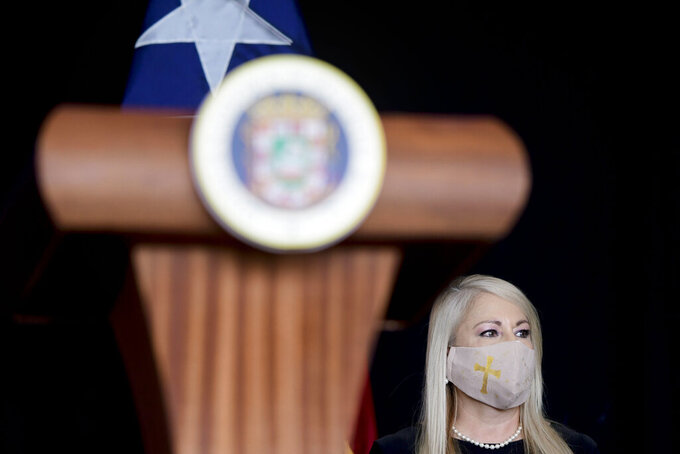 Governor Wanda Vazquez Garced offers a press conference to announce the extension of the Covid-19 curfew until June 15, while detailing the new sectors of the country that may resume operations from May 26 as part of a new executive order, in San Juan, Puerto Rico, Thursday, May 21, 2020. Puerto Rico is cautiously reopening beaches, restaurants, churches, malls, and hair salons under strict conditions as the U.S. territory emerges from a two-month lockdown despite dozens of new coronavirus cases reported daily. (AP Photo/Carlos Giusti) PUERTO RICO OUT-NO PUBLICAR EN PUERTO RICO

SAN JUAN, Puerto Rico (AP) — Puerto Rico’s governor has extended a coronavirus curfew for three more weeks, marking the longest such curfew in any U.S. jurisdiction even as she authorized the re-openings of certain businesses and government agencies.

Everyone except essential workers has to stay indoors from 10 p.m. to 5 a.m. until July 22. In addition, face masks remain mandatory, and those who disobey will be fined.

The initial curfew began in mid-March, and Gov. Wanda Vázquez warned Sunday that stricter measures could return if she sees a spike in cases, with several small outbreaks already reported in some towns that health officials blame on those visiting or returning from the U.S. mainland.

“Our priority is to keep our island healthy,” Vázquez said.

The island of 3.2 million people has reported at least 153 COVID-19 deaths, along with more than 1,630 confirmed cases and more than 5,600 probable cases.

Health experts criticized the latest round of reopenings, saying it was premature, especially given a lag in government statistics that don’t reflect the impact of major reopenings announced nearly a month ago, including beaches, movie theaters and gyms.

“We could be entering a critical phase in this pandemic,” Puerto Rican epidemiologist Roberta Lugo said. “They shouldn’t have rushed into these decisions.”

Lugo and others also note that the government has done too little testing, and most of it using the wrong sort of tests to truly know the extent of the pandemic in Puerto Rico. Adding to the concern is a worsening drought that led the government to announce strict water rationing measures on Monday in which nearly 140,000 clients will not have water for 24 hours every other day starting July 2.

Vázquez said government agencies will reopen to the public starting July 6, and certain public employees are expected to return to work on July 1. In addition, people can now resume nearly all sports, with professional sporting events restarting July 15 except those that require physical contact, such as boxing.

Casinos were allowed to reopen, but at 75% capacity, and restaurants and businesses can now operate at that capacity as well, up from 50%. Concert venues and cemeteries also are reopening, but with social distancing measures in place. In addition, natural reserves, state forests and wildlife refuges are re-opening to the public on July 1.