Punching out of it: USA Boxing has Olympic revival in Tokyo 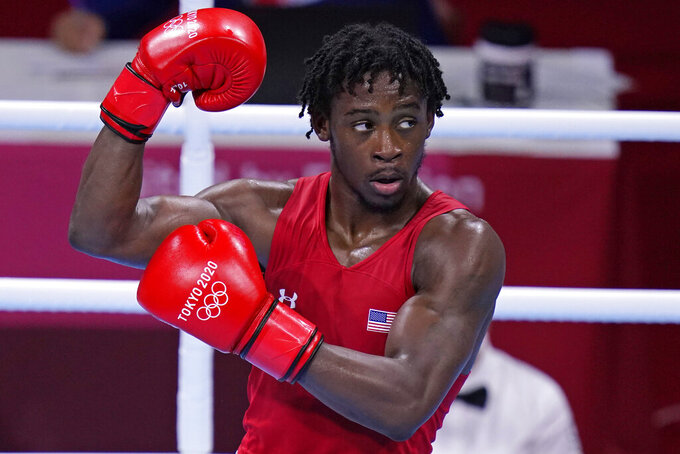 TOKYO (AP) — Richard Torrez Jr. went into the Olympic boxing ring Wednesday with a game plan jointly concocted over the phone by his father back home in central California and by Billy Walsh, his national team's head coach in Tokyo.

The 22-year-old super heavyweight from Tulare then executed the plan perfectly and repeatedly until his Kazakh opponent's face was split too far open to continue the third round, thanks to a brutal barrage of Torrez's confounding overhand lefts.

Torrez advanced to the Olympic final on Sunday, when he'll have a chance to be the first U.S. super heavyweight to win gold since Riddick Bowe in 1988.

He could even be the first American man to win boxing gold in 17 years — but only if featherweight Duke Ragan and lightweight Keyshawn Davis don't beat him to it in the ensuing three days.

Afterward, Torrez lavished praise on his coaches and the revitalized national team program that has put this genial hulk of a fighter in position to join the American greats of his sport — a generation after the U.S. boxing team's Olympic prime seemed to have passed.

The Americans are heading home from Tokyo with four medals, the most boxing hardware they've claimed since 2000 — and three could still be gold.

Torrez's success is emblematic of the work done in the past half-decade by Walsh, who has led the revitalization of the team that still leads the overall Olympic boxing table in gold medals and total medals despite winning rarely in the 21st century.

Dominant middleweight Claressa Shields is the Americans' only gold medalist in 17 years, and the men won only three medals in the previous three Olympics combined.

After Walsh left the Irish Olympic boxing program he had built into a powerhouse that punched well above its weight, he accepted the enormous challenge of leading the national team for USA Boxing, which epitomized the gifted fighter who can’t get the most out of his many natural advantages.

Many American fighters understandably turned pro instead of waiting out four-year Olympic cycles, while others struggled to adapt their styles to the disciplined, high-activity performances necessary to thrive in the "amateur" sport.

“The (challenge) is massive, because the system within the country is based around professional boxing,” Walsh said. ”Every gym is training the next pro for a world title, so the vision of the Olympic Games is not there, and it still isn't in some places. That was the biggest thing: Going there and trying to give them the platform of the Olympics to launch them to world championships."

Fighter by fighter, Walsh has built trust and teamwork. He also acknowledges he found excellent Olympians for this cycle: Ragan, Davis and middleweight Troy Isley all turned pro in the past year, but eagerly returned when they were added to the Tokyo field.

Ragan says he has spent much of the past decade back home in Cincinnati wearing a succession of T-shirts that all say, “Future Olympic Gold Medalist." Davis has been telling his friends since childhood that he wanted a gold medal more than a professional belt — and so has Torrez.

“The big challenge was turning the switch from being that pro and fighting that slower pace and intensity,” Walsh said.

“We’ve been working on it, and each day we’re getting better. We’re getting it back to where we were. It’s a move in the right direction, and our team is growing.”

Indeed, Davis and Ragan have both managed to adjust their burgeoning pro styles back to the Olympic style, which usually rewards a high work rate and pressure over professional counterpunching and waiting for a big shot. Davis has reached the lightweight semifinals with three impressive wins even though he says he's still not completely in sync with the amateur style.

Davis arrived in Japan riding a wave of confidence from a 3-0 start to his pro career, and he told The Associated Press he expected a gold medal to be “easy work.” The genial lightweight has changed his tune after battling to the semifinals with ample help from Walsh and USA Boxing.

“When I'm on the top of my game, it will be easy work,” said Davis, who fights Armenia's Hovhannes Bachkov on Friday for a spot in the final. “But my coach, Billy Walsh, he said, ‘Yeah, ain’t nothing easy here.' Yeah, coach, you're right. This is harder than I expected. All these guys come here to win gold. It's doing nothing but making me better.”