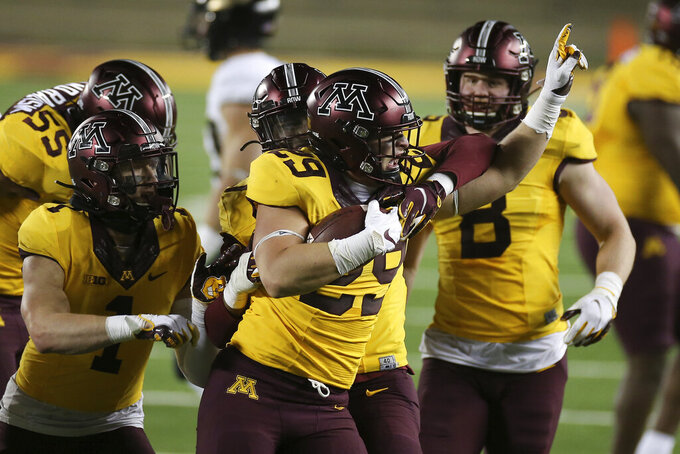 Minnesota linebacker Josh Aune (29) holds the ball after he intercepted a Purdue pass during the second half of an NCAA college football game Friday, Nov. 20, 2020, in Minneapolis. Minnesota won 34-31. (AP Photo/Stacy Bengs)

And after asking the Big Ten for an explanation on a late offensive pass interference call that took away the Boilermakers' go-ahead score at Minnesota, Brohm finally heard back from the league office. He just couldn't share the response publicly.

“I’m not at liberty to speak about those conversations," he said Monday. “I can say this — of all the people that I’ve talked to, there hasn’t been one that doesn’t totally agree with my assessment of the play.”

While an angry Brohm shouted at the officials on the sideline, he took a more delicate approach in his postgame news conference — only strongly suggesting the refs got it wrong.

But those new twists only add to the oddity an already strange season.

Purdue (2-2) won its first season opener under Brohm while he was quarantining at home following a positive COVID-19 test. Two weeks later, the Boilermakers got an unexpected bye courtesy of a virus outbreak that led to the cancellation of the Wisconsin game.

O'Connell got hurt in a loss to Northwestern in the Boilermakers next game and on Monday, Brohm broke with his customary strategy of not naming a starting quarterback until game day.

“Yes,” he said when asked if Jack Plummer would start again this week in place of O'Connell. “Aidan’s got an injury that we’re going to try to get him back as fast as we can, and we’ll see when that is. I don’t know the timetable. “

But it was Friday's postgame events still stirring the discussion Monday.

In addition to the questionable call and subsequent game-sealing interception thrown by Plummer, Moore issued a statement in which he apologized for becoming a distraction. He said he had asked Brohm to keep his hamstring injury under wraps.

Moore appeared in his first game in nearly 14 months and was his usual electrifying self.

“I’m sure he probably had some soreness and we’ll gauge that as this week goes on," Brohm said. “It’s the first time he’s really seen that extensive action for a while."

Meanwhile, kicker J.D. Dellinger offered another apology to Purdue fans on his Twitter account after one field-goal attempt was blocked and another, which would have tied the score at 34, sailed wide right.

“I missed a kick I should make every time and deserve all the blame and hate coming my way," he wrote. "Although I can’t take it back, I promise that I will do everything in my power to make sure it doesn’t happen again."

Now, the Boilermakers are back to work, trying to forget about all the angst since last weekend as they focus on snapping a two-game losing streak Saturday when Rutgers visits Ross-Ade Stadium.

“If we’re not willing to put in the time and to lay it out there every week, then you’re not going to win. That’s just the bottom line," Brohm said. “We have definitely moved on to Rutgers and we’ve got a lot of work to do."