Push on to release inmates; Vermonters to track vaccinations 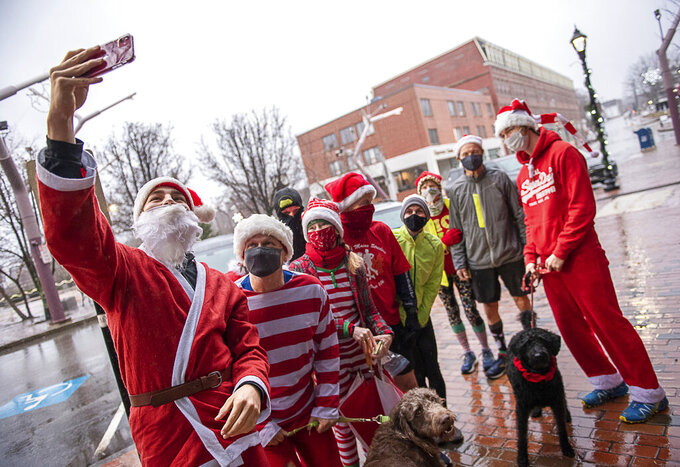 Maxi Kolb, an exchange student from Germany, takes a photo of a group of Santas and elves getting ready for their annual Christmas morning run on Main Street in Auburn, Maine on Friday, Dec. 25, 2020. The group gets together every Christmas morning and runs a loop through Lewiston Auburn. (Andree Kehn/Sun Journal via AP)

BOSTON (AP) — A look at coronavirus developments in New England:

Prisoner advocates in Massachusetts are redoubling their legal efforts to release inmates from state prisons because of the coronavirus pandemic.

Prisoners’ Legal Services of Massachusetts argued in a Suffolk Superior Court filing Thursday that the state Department of Correction needs to release inmates to home confinement, furlough, medical parole and other legal measures so that the remaining prisoners can safely socially distance behind bars.

The organization submitted accounts from roughly 40 inmates about crowded conditions in state prisons and their fears of contracting COVID-19 to bolster their appeal.

Prisoners’ Legal Services also said four prisons — MCI-Norfolk, MCI-Shirley, NCCI Gardner and MCI Concord — account for nearly all of the more than 1,000 new cases of the virus in the correctional system since Oct. 29.

“The failure to create the opportunity to distance inside prison walls has resulted in uncontrolled outbreaks, mass sickness and preventable deaths,” Elizabeth Matos, the organization’s executive director, said in a statement Thursday.

The state Department of Correction declined to comment on the pending litigation, but noted its inmate population has dropped by more than 1,200 people since March, and its facilities are at 61% of capacity.

Vermonters can now follow the progress of the state’s efforts to vaccinate the population against the virus that causes COVID-19 on a new dashboard on the website of the Health Department.

The dashboard, which went live Wednesday, will provide information on the number of people who have been vaccinated and how many people have completed the two-shot series of vaccines needed to have immunity against the virus.

It will also show the rates of vaccination by age, sex, race and ethnicity.

As of Thursday just under 4,400 people had received the first dose of one of the two vaccines currently being administered in Vermont.

The state expects to receive a total of about 34,000 doses of vaccine by the new year.

Health Commissioner Dr. Mark Levine says that initially the dashboard will be updated weekly, on Wednesdays, but as progress is made in the state’s vaccination campaign it could be updated more frequently.

An inmate at the Adult Correctional Institutions died on Christmas Day after having contracted COVID-19.

The name of the 79-year-old inmate was not disclosed. He had been serving a life sentence for murder, according to a press release from the state Department of Corrections.

He had been incarcerated at the ACI’s medium security unit.

The man is the second inmate with COVID-19 to die in a Rhode Island prison this month.

Director of Corrections Patricia Coyne-Fague said in written statement, according to the that The Providence Journal, that the department is doing “everything we can to keep people as safe as possible.”

To date there have been more than 18,000 confirmed cases of COVID-19 reported in the state since the pandemic began.

More than 1,000 people have been hospitalized during the pandemic and 319 people have died.

On Friday there were 185 people hospitalized with COVID-19. Fifty-four people were in critical care and 16 people were on a ventilator.

Friday’s numbers come as Maine is preparing to expand access to COVID-19 vaccines with the arrival of additional doses expected next week, the Portland Press Herald reported.

Those doses will go toward vaccinating healthcare workers and residents and staff at long-term care facilities.

More than 15,700 people have been vaccinated in Maine.

A respiratory therapist is embracing his talent for baking to cheer up his co-workers.

Daniel Liberatore is part of the respiratory therapy team at Cheshire Medical Center in Keene, He and his colleagues have struggled to help patients with COVID-19 who are struggling to breathe. That often translates in long, difficult shifts.

Libertore’s other passion is baking.

WMUR-TV reports that Libertore came back to the medical field after owning his own bakery, Master Pieces Cake Art.