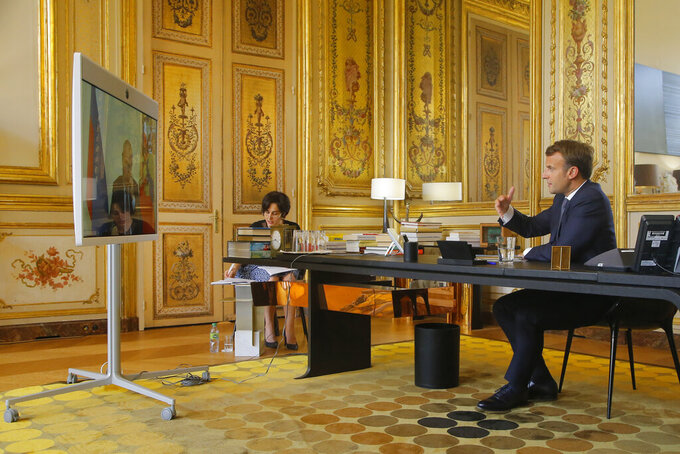 Putin, noting that it was the 75th anniversary of the signing of the United Nations' charter, spoke of the need to pool efforts to combat common threats such as the coronavirus pandemic, international terrorism and climate change.

He said the call with his French counterpart offered an opportunity to discuss the crises in Ukraine, Syria and Libya, and unresolved tensions in the Balkans, among other issues.

“If we want to achieve positive results, we need to combine our efforts,” the Russian leader said during the conversation in which he and Macron addressed each other by their first names. “I know about your intention to organize joint work on many of those issues. We will fully support your proposals.”

Putin mentioned a Red Square parade held in Moscow on Wednesday to belatedly commemorate the 75th anniversary of World War II's end in Europe to hail France's contribution to defeating the Nazis.

“We in Russia will never forget the French people who fought alongside our soldiers on the Eastern Front,” Putin said.

Macron, who was due to attend the parade on May 9 before it was postponed due to the pandemic, voiced regret that the virus prevented him from visiting Moscow. The French president paid tribute to the Soviet Union's role in World War II.

“The crisis that we have just been through, like all regional crises we’ve experienced, shows the importance of making the European space, in a broad sense, from Lisbon to Vladivostok, a real space of cooperation and peace," Macron said.

Responding to an invitation from Putin to come to Russia, Macron said he’d be happy to visit “so we could spend a lot more time together,” but only “if health conditions allow,” possibly at the end of summer.

Macron’s office said the meeting was part of an outreach effort launched in August to try to thaw France's relations with Russia, which were damaged by Russia's annexation of Crimea from Ukraine in 2014.

The French presidency said that during the call with Putin, Macron noted the need to put an end to the “dangerous cycle of foreign interference” in Libya and the need for a quick ceasefire and the revival of political dialogue.

A French presidential official said that the two leaders spent most of the conversation discussing the situation in Libya and voiced a shared interest in the stabilization of the country and reunifying its institutions.

The official, who spoke on condition of anonymity because he wasn't authorized to make public comment, noted that Macron expressed France’s anger at foreign interference, including by Russian private military contractor Wagner.

In conflict-stricken Libya, Russia, France, Egypt and several other countries back the east-based forces led by commander Khalifa Hifter, who has been waging war against the U.N.-supported government in the capital, Tripoli, which is mainly backed by Turkey.

During the call, the French leader also stressed his concern over the humanitarian situation in Syria, which the pandemic has worsened. The French presidential official said Macron pushed for a humanitarian corridor in the country's northwest, arguing that a long route for aid deliveries via Damascus was not an option.

Turning to Ukraine, where Russia-backed rebels have been fighting Ukrainian troops in the country's east for more than six years, Macron emphasized quickly relaunching the implementation of a road map toward peace that was agreed to during a December meeting in Paris of the leaders of France, Germany, Russia and Ukraine.

The Kremlin said in its readout of the call that Putin emphasized the need for Ukraine to fulfill its obligations on political settlement under a 2015 deal brokered by France and Germany. More than 14,000 people have been killed in the fighting in eastern Ukraine since 2014.

The two leaders also emphasized the importance of preserving existing arms control agreements and the need to improve trust and predictability in the military sphere, the Kremlin said.