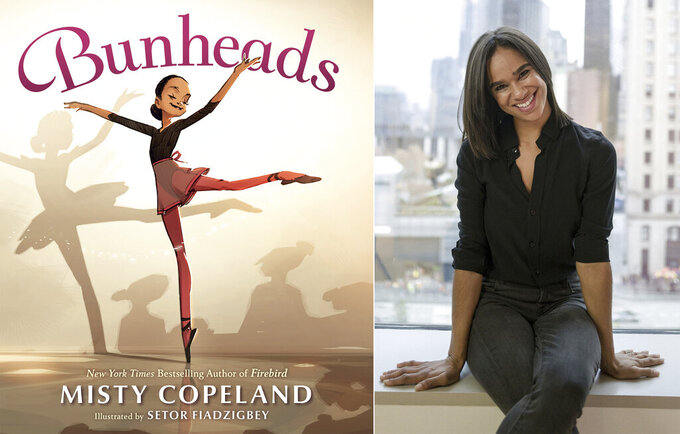 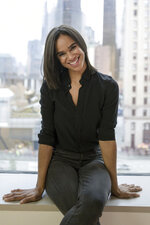 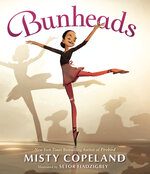 NEW YORK (AP) — Misty Copeland has long told the story of the childhood ballet teacher who recognized her talent and took the young dancer, then 13, from the cramped motel room she was living in to stay in her own house for three years, so she could continue her training.

Now “Miss Bradley” — Cynthia Bradley — is one of the key characters in Copeland’s new children’s book, “Bunheads,” a story based on Copeland’s own youth and introduction to ballet.

In “Bunheads,” the story of young Misty's first ballet class and first dance production (the classic ballet “Coppelia”), the celebrated ballerina not only pays tribute to key figures in her youth, but explores themes of camaraderie among dancers, the need for a support system, and the importance of having the confidence to try something new. Confidence is a quality Copeland says was often lacking in her journey from a childhood of modest means in California to becoming the most famous ballerina in America — and the first female Black principal dancer at American Ballet Theatre.

Copeland sat down recently, via Zoom of course, to discuss her new book — her second children's book, after “Firebird” — as well as what she’s been doing during the pandemic, with theaters shut. She also spoke of the influence she hopes the Black Lives Matter movement will have on the overwhelmingly white world of classical ballet.

The interview has been edited and condensed for length.

AP: What inspired this new book?

MC: The characters are all people I have in my life to this day. I wanted to be able to show a perspective that’s not often depicted in film and television and books, about the camaraderie and relationships that dancers have with each other, even from a young age. That’s been such a big part of my growth as an individual and as a dancer.

AP: Who's the character of “Cat” based upon?

MC: She was my best friend. Her name is Catalina. She’s a young Mexican-American, aspiring ballerina. I was such an introverted child. And I started ballet so late, at 13. I remember the first time I walked into the ballet studio at Miss Bradley's, Catalina was the first person to come to me and kind of break that ice.

AP: Tell us about Miss Bradley.

MC: My family was living in a motel and we were really struggling financially. It was really difficult for my mom ... with six children as a single parent, (to have) me in ballet classes. It got to a point where it was just too much. And Cynthia had no idea I was living in a motel. I told her I would have to quit, and she drove me home and was stunned by the whole situation. She had driven away after dropping me off. She turned back around. She knocked on the door and she asked my mom if I could live with her and train with her, because she had so much belief in my talent and ability to become a professional.

AP: What are some of the themes you want to get across to young people?

MC: Acknowledging and being okay with the fact that if you don’t have the confidence to believe in yourself on your own, that it’s something that you can gain ... from having a support system around you. It’s been difficult for me throughout my life. And I know it’s difficult for a lot of young people to accept and understand that you can’t do everything on your own, and you’re going to have days when you’re not strong.

MC: It’s a term of endearment. When you see those little girls, you can spot them from a mile away, they have buns on their head. They’re wearing their jean shorts over their tights, they've got to make it to class on time and don’t have time to change. Those are the bunheads.

AP: The pandemic has hit the dance world hard, as with all the arts. What have you been doing since March?

MC: There hasn’t been a lot of dancing. I experienced an injury to my back right before we went into quarantine. So a lot of this has been recovery for me physically. But it’s (also) been a moment where I could step back and really focus in a way I haven’t been able to on so many projects. I have a production company. I’m writing more books.

AP: Most dancers have lost their income during the pandemic. It must be extremely difficult.

MC: Dancers don’t make a lot of money and we don’t have the facilities to keep up our training in our homes. We're not getting paid when theaters are not open. (At) American Ballet Theatre in particular, a lot of dancers are foreign and so they can’t go home. They can’t collect unemployment. But I do see a silver lining in all of this. I feel like now is the time for us to stop and breathe ... and revamp how we connect with more people, how we reach communities that are not often included. To redefine how we reach people.

AP: How has the dance world been affected by the current struggle for social justice, and the BLM movement?

MC: I’ve been (long) speaking about racism in ballet, the lack of diversity. My experience is that of so many dancers who have not had their stories told. And so in this time, I feel like I’m finally being heard. And the spotlight's being put on the ballet world in a way that they’re going to have to make change. I think a lot of these institutions are seen as very exclusive. They’re stuffy. They’re white. I think we can create theaters in communities where there is no more excuse for not having a venue in these places, and allowing these communities to feel like we’re a part of them.