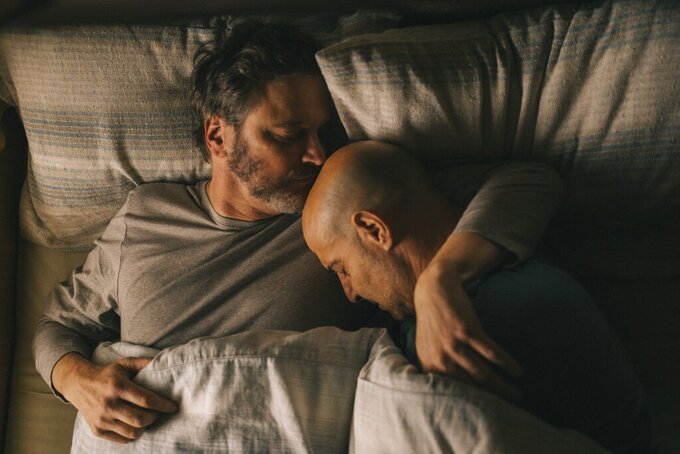 He has home-schooled little kids with his wife, Felicity Blunt. He has shared cocktail recipes. He has had the virus. He has worked on film and TV sets with new safety protocols. He has written a food memoir -- the first draft in London’s first lockdown, the second draft in its second.

And he is starring in a newly released film in which he gives one of the finest performances of his career. In “Supernova,” Tucci plays Tusker, a novelist on the edge of early on-set dementia. He’s still himself but it’s starting to slip away. He and his longtime partner, Sam (Colin Firth) take a road trip in an R.V. through England’s Lake District, maybe their last. The film, currently playing in theaters, will be available to rent digitally Feb. 16.

“It’s a real pick-me-up during the pandemic,” Tucci deadpanned in a recent interview.

But in “Supernova,” Tucci and Firth — real-life friends for 20 years — are such a convincing, tender couple that the intimacy and compassion of the film, written and directed by Harry Macqueen, is a kind of salve, even when it's heartbreaking.

For the 60-year-old Tucci, who has long exuded wit and sophistication as both an actor ("Spotlight," “The Hunger Games”) and filmmaker ("Big Night," “Joe Gould's Secret”), the role of Tusker is one to celebrate. Speaking by video conference from London, Tucci mused that he might celebrate the film's premiere by a Zoom with Firth, over Negronis.

AP: As an author of numerous cookbooks, are your passions for acting and for food interwoven?

TUCCI: They’re only interwoven, I suppose, in “Big Night” or “Julie & Julia.” But other than that, no. I act to eat. The only way I can afford to eat is to act. (Laughs) If I’m offered a job, my first thought is: OK, where does it shoot? The second thought is: How much will they pay me? And if it is shooting someplace else, I instantly think of the food there. I know if it’s Toronto, that’s fine. I don’t want to be that far away, but I know there’s great food. Vancouver? Fine. If someone says Bulgaria, I’m probably going to go, “How long is that shoot?”

AP: Do you sometimes cook for your co-stars?

TUCCI: Absolutely. I cooked for Colin when I did “Supernova.” We’ve been friends for a long time so we’re in each other’s kitchens. His wife is a wonderful cook. I love to do it. I like to eat what I like to eat. I don’t want to go and eat some hamburger some place in the middle of nowhere. I’d rather take the time and put in the effort to make myself something good.

AP: You’re a very precise actor. I can see that being similar to cooking.

AP: If you’re choosing projects partly by circumstance, driving around the Lakes with a friend sounds like a good option.

TUCCI: It was really nice. It was hard to go out and find food, I’ll be honest. So the cooking was a necessity besides I like doing it. But it was a great experience. I had never been to the Lake District before. Everybody I knew had always talked about it. It was even more beautiful than they described. To work with one of your best friends and work with this incredibly talented director on a beautiful script on a story that’s meaningful, it just doesn’t happen. Nobody’s getting rich off it but that’s not the point of it.

AP: “Supernova” is about a couple together navigating a terminal condition. Your first wife, Kathryn Spath-Tucci, with whom you have several children, died in 2009 from breast cancer. Were you thinking much about the conversations you and she shared near the end while making the film?

TUCCI: Something like that just becomes a part of who you are. You don’t even have to think about it. It’s just there. And you don’t really want to think about it, but it’s there. It’s always there. It’s there in your dreams. Once you get older, even if you haven’t experienced what I experienced, you do have a knowledge of it. Because you’ve lost people. You’ve lost other people, whether it’s parents or grandparents or older friends. I’ve lost quite a few friends over the last few years. I’m hardly old. I’m older but I’m not old yet, I don’t think. But, yeah, with Kate, it’s always in you. It’s a very strange thing. It’s not that you dwell on it. It’s just a part of you. You just wish that you could have done something more to help. There’s a guilt. There’s no question about that. There’s a guilt that you’re moving on with your life. You’re watching your kids grow up. You’re going to see, hopefully, grandchildren. She won’t have that opportunity. Your brain starts to even get confused sometimes because you think, “Oh, she would love to see my little kids.” Which wouldn’t make any sense. Because you love them so much and I love her so much. It’s all just about love, really.

AP: You were originally to play Sam with Firth as Tusker. Why did you switch?

TUCCI: I was more comfortable playing Tusker. It just seemed more right to me, and to Colin and to Harry, obviously. Colin had brought it up. He said, “Suppose we switch roles?” I said I was thinking the same thing. I don’t know why. Every time I looked at it, I said something’s not right. It just made better sense, rhythmically.

AP: Had you ever done that before?

TUCCI: No, never. That’s part of working with friends. When you work with a friend, you have a shorthand and you trust each other. And you trust each other enough to say, “Let’s switch roles.” Nobody would ever do that. You don’t walk onto a set and go, “Hey, I have an idea.” Can you imagine the agents and producers and everybody freaking out?

AP: Do you feel you've gotten better as an actor as you've aged?

TUCCI: I feel like I’ve gotten better, yeah. That was the goal, just to keep getting better. I’m more relaxed now because I’ve just been doing it for so long. A lot of it is technique. And a lot of it is realizing the more often you do it, the less you really have to do -- that economy is everything. You don’t need, a lot of times, to expend the energy that you thought you needed to when you were young. Also, you’re older now so you can’t. (Laughs) The only thing at this point: I hate waiting. Like I can’t bear it. I just hate it. Life’s too short. You spend so much time on a movie set just waiting. As a director, I try to move things along very, very swiftly. I don’t like long days. I don’t like lunch hours. Let’s go, do it, go home and have a martini and a nice dinner.