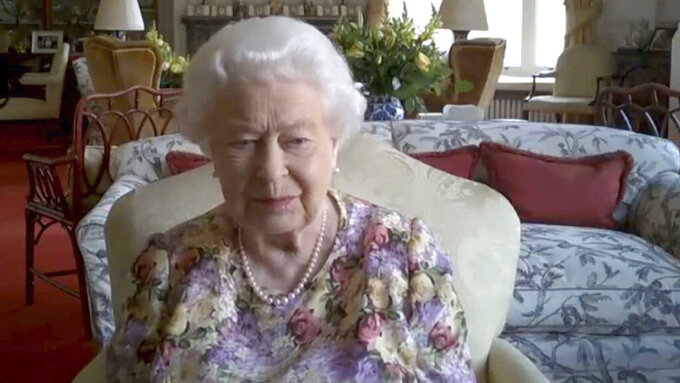 In this video grab issued Thursday June 11, 2020, by Buckingham Palace, showing Britain's Queen Elizabeth II, as she takes part in a video conference call with the Princess Royal Princess Anne, and carers supported by the Carers Trust, on June 4, 2020. The monarch talked with four carers and the trust's chief executive Gareth Howells, on June 4 from Windsor Castle, during the coronavirus pandemic lockdown. As part of Carers Week in the U.K., the 94-year-old monarch showed once again that she's adept at meeting the challenges posed by new technologies, taking part in her first public video conference call to chat to four carers about the challenges they face looking after someone close to them during the coronavirus pandemic. (Carer's Trust/Buckingham Palace via AP)

LONDON (AP) — Queen Elizabeth II has taken part in her first public video conference call to chat to four carers about the challenges they face looking after people close to them during the coronavirus pandemic.

As part of Carers Week in the U.K., the 94-year-old monarch showed once again that she's adept at meeting the challenges posed by new technologies.

“Interesting listening to all your tales and stories and I'm very impressed by what you have achieved already,” she said in part of the call that was posted Thursday on the royal family's social media accounts.

“I'm very glad to have been able to join you today,” she added.

Elizabeth was last to join the call and the first to leave — one piece of royal protocol that Buckingham Palace opted to preserve.

The queen, who has been isolating with her 99-year-old husband, Prince Philip, at Windsor Castle over the past three months, was on the call for around 20 minutes after logging in online from the castle's Oak Room. The call took place on June 4.

During the call, she heard about the isolation and difficulties carers have been facing through the pandemic.

“What was really nice was that, while you could tell she had never done that kind of call for work before, she really took it in her stride," said one of the people on the call, 24-year-old Alexandra Atkins, from the Welsh city of Swansea.

There are around 7 million people across the U.K. caring on an unpaid basis for an ill or frail family member or friend. Most have no real experience; they just do it because they are husbands or wives, sons or daughters, or even a neighbor who wants to help out.

The queen was also joined on the call by her daughter, Princess Anne, who has been President of The Carers Trust since it was launched in 2011, and Gareth Howells, the trust's chief executive.

Other members of the royal family, including the heir to the throne Prince Charles and his son Prince William, have been joining numerous video conferencing calls throughout the pandemic to assist causes dear to them.

William, for example, revealed over the weekend during a video call that he has been anonymously helping out on a crisis helpline during the lockdown.