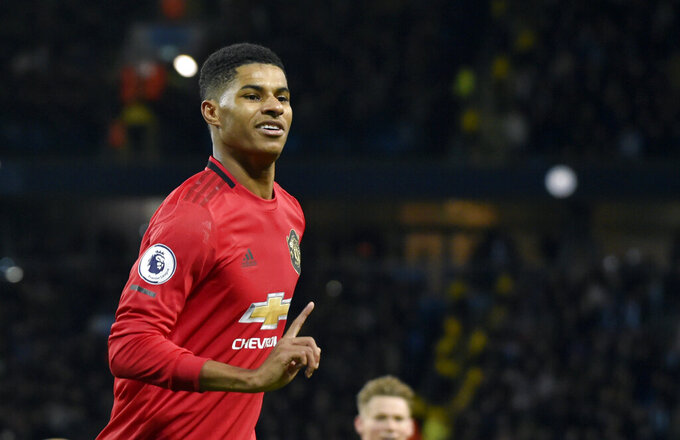 FILE - In this Saturday, Dec. 7, 2019 file photo, Manchester United's Marcus Rashford during their English Premier League soccer match against Manchester City at Etihad stadium in Manchester, England. Rashford has been honored with an MBE by the Queen on Friday, Oct, 9, 2020 for campaigning against child poverty which saw him convince the government to reinstate free meals for vulnerable children. (AP Photo/Rui Vieira, file)

LONDON (AP) — Manchester United player Marcus Rashford has been honored by Queen Elizabeth II for a campaign against child poverty during the pandemic that saw him convince the government to reinstate free meals.

The 22-year-old forward has been made a Member of the Order of the British Empire, or MBE, in the Queen's Birthday Honors list, which is approved by the prime minister. Boris Johnson was forced into a U-turn by Rashford in June, agreeing to continue funding meals for poor children over the summer holidays.

Now Rashford is using the announcement of his royal accolade to urge Johnson's administration to extend the food program.

“The fight to protect our most vulnerable children is far from over," Rashford said. “I would be doing my community, and the families I have met and spoken with, an injustice if I didn’t use this opportunity to respectfully urge the prime minister to support our children during the October half-term with an extension of the voucher scheme, as the furlough scheme comes to an end and we face increased unemployment.

“Another sticking plaster, but one that will give the parents of millions of children in the U.K. just one less thing to worry about."

Rashford has spoken about how, as one of five children of a hard-working single mother, he relied growing up in the Manchester area on free school meals.

“As a young black man from Wythenshawe, never did I think I would be accepting an MBE, never mind an MBE at the age of 22,” Rashford said. ”This is a very special moment for myself and my family, but particularly my mum who is the real deserving recipient of the honor."

Rashford is away with the England team which faces Belgium on Sunday and Denmark on Wednesday in the UEFA Nations League.

And he continues to show leadership beyond the pitch, driving for social change.

“Let’s stand together in saying that no children in the U.K. should be going to bed hungry," he said. "As I have said many times before, no matter your feeling or opinion, not having access to food is never the child’s fault.”

The Queen's Birthday Honors were to be released in June but were delayed due to the coronavirus that shut down Britain.

Three men have been honored for their services to rugby in Wales.

Warren Gatland, a New Zealander who coached Wales for a record 12 years, has been made a Commander of the Order of the British Empire, or CBE.

Gareth Thomas, a former Wales and British Lions captain who has campaigned for equality since announcing he was gay in 2009, has been awarded a CBE.

Current Wales captain Alun Wyn Jones has been made an OBE or Officer of the Order of the British Empire.