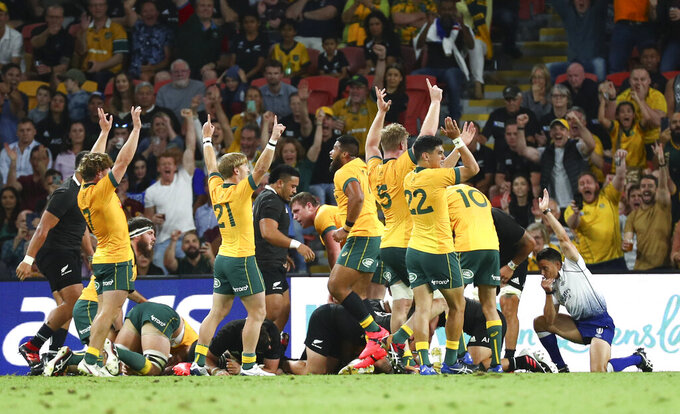 BRISBANE, Australia (AP) — Queensland Reds will host New South Wales in a traditional derby to kick off a 2021 Super Rugby AU competition that will likely set the stage for a crossover series against clubs from New Zealand.

Australia’s four Super Rugby franchises plus the Perth-based Western Force will feature in a 12-week tournament starting Feb. 19 and concluding with a final on May 8.

The same format was used for the 2020 season, which was overhauled amid the COVID-19 pandemic.

The defending champion Brumbies, based in Canberra, will open against the Western Force and the Melbourne-based Rebels have a first-round bye. Most weekends will include a game on Friday night and a game on Saturday, with one match per week featured on free-to-air television for the first time since Super Rugby started in 1996.

“Super Rugby AU was terrific in 2020 and will get better next year as this next crop of Australian rugby stars continue to develop, and they are complemented by some genuinely talented international players who have since arrived on our shores,” Rugby Australia interim chief executive Rob Clarke said in a statement Wednesday.

Rugby Union officials in Australia and New Zealand are working on details for a post-season Super Rugby series after their domestic finals.

The success of the inaugural Super Rugby Aotearoa competition, rapidly assembled when the full Super Rugby tournament — involving clubs from five countries — was suspended in March as international borders closed, was a big hit in New Zealand.

The 2021 tournament will follow the same format as the first with home and away matches among New Zealand’s five Super Rugby teams, leading up to a May 8 final. The format retains the Sunday afternoon matches which were popular with fans this year.

Australia is currently hosting the Tri-Nations series involving New Zealand and Argentina. The Wallabies returned to international rugby with a draw and a loss against the All Blacks in New Zealand, followed by a loss in Sydney and last weekend's win in Brisbane.