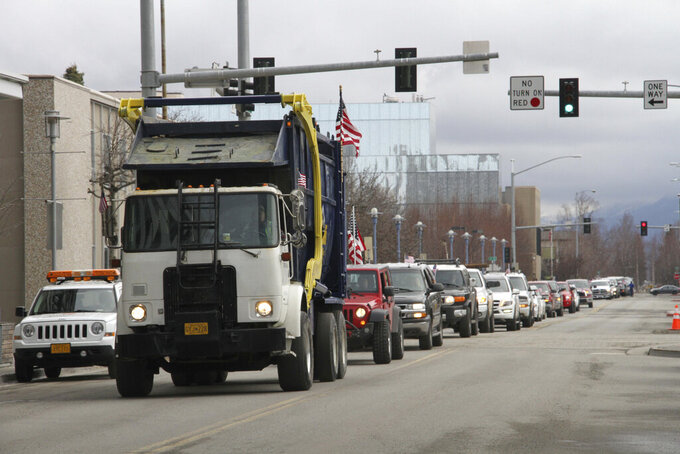 More than 80 vehicles take part in a caravan through downtown Anchorage, Alaska, Wednesday, April 22, 2020, with participants urging local and state leaders to open up businesses shuttered temporarily while residents were told to stay home. The state will allow some businesses to open Friday, followed by some in Anchorage next Monday (AP Photo/Mark Thiessen)

JUNEAU, Alaska (AP) — Gov. Mike Dunleavy has proposed disbursing more than $1 billion in federal coronavirus relief aid through a process that would not require the Legislature to reconvene. A legislative attorney, however, has raised questions with that approach.

Dunleavy has asked the Legislative Budget and Audit Committee to review his plan to distribute funds to help municipalities, nonprofits, small businesses, schools and other areas. State law lays out a process by which a governor can submit to the committee plans to accept and spend on a budget item additional federal or other program funds. Even if the committee disagrees, a governor can proceed.

The law includes a 45-day clock though Dunleavy said he wants quick action.

But Megan Wallace, director of Legislative Legal Services, raised concerns with use of the process for the federal aid in a memo responding to questions from Sen. Bill Wielechowski. She told a House committee last week there were a lot of unknowns.

“If we want to take out the speculation, or confusion, in terms of authority to expend those monies, yes, the simplest thing to do would be for the Legislature to specifically appropriate” the funds, she said.

The Legislature went into recess after passing a budget in late March amid coronavirus concerns. Rep. Chris Tuck, who chairs the budget and audit committee, said Wednesday that legislative finance and legal staff were reviewing Dunleavy's proposal to weigh in on what possibly could go through the process and what might need full legislative action.

Legislative leaders and Dunleavy have sparred over separation of powers issues previously.

Dunleavy told reporters Congress and President Donald Trump wanted the money to be distributed as quickly as possible.

“They did not specifically send it through the Legislature; they sent it directly to the states,” he said, adding there is no required state match for the funds. “So this is directly from the feds to the state, passing through to the individuals at the local level to try and help as quickly as possible.”

Earlier this month, Dunleavy said he expected many of the larger vetoes he made to the state budget, including aid for schools and local governments, would be offset through use of funds from the federal coronavirus relief package. In a statement Wednesday, he said he was working “with the best available information at the time which led many to believe CARES act funding could in fact be used to offset revenue loss."

But he said there's a “lack of clarity” surrounding this. The state consequently will act under the guidelines that the funds “can be used to mitigate the impact of the pandemic on state/municipal expenses and to support businesses and the state’s nonprofits," he said.

Meanwhile Wednesday, a caravan of more than 80 vehicles paraded through the otherwise largely quiet streets of downtown Anchorage, with participants blaring their horns and waving American flags. Organizers of the demonstration, from the Facebook group Open Alaska, said they supported Dunleavy’s move to allow some businesses to partially reopen starting Friday. Group leaders urged Anchorage Mayor Ethan Berkowitz to also do more to open businesses.

“To the extent that their sole goal is to reopen Anchorage, I am supportive – but on a timeline that minimizes the risk of COVID to the public and to the businesses that call the municipality home,” Berkowitz said in a emailed statement to The Associated Press.