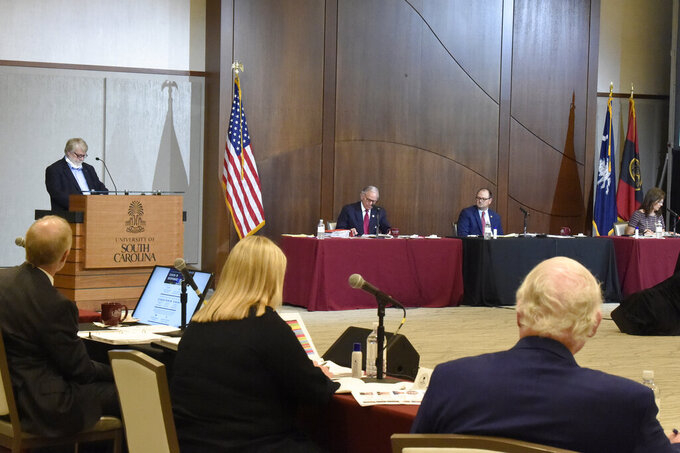 COLUMBIA, S.C. (AP) — A group of government, health, tourism, religious and social leaders that Gov. Henry McMaster created to help South Carolina grapple with the coronavirus pandemic is winding down its work.

Accelerate SC met Tuesday with members listening to reports from its committees. They spoke about increased COVID-19 testing, rules that restaurants and barbers must follow to reopen and obstacles local governments are facing as revenues dip and money is spent to fight the pandemic.

They got a first look at how South Carolina might spend the $1.9 billion in federal help from the pandemic.

A committee suggested $100 million to expand broadband internet access, which became a big problem after schools closed and businesses asked people to work from home. About 10% of the state’s 5 million people have no broadband access at all and one in four have internet speeds slower than what is considered minimally acceptable, according to the Federal Communications Commission.

Other suggestions included $500 million be put back into the unemployment trust fund being drained by double-digit unemployment; $250 million to help out public and private hospitals; and $160 million for a week of summer instruction to help elementary school students catch up on reading and other lost skills.

Leaders of the group said that plan was still preliminary and will likely change before final recommendations are given to Gov. Henry McMaster, who said they looked good at first glance.

McMaster promised to get details to the General Assembly in a few weeks so they can debate and approve it like a state budget. Additional federal money is also heading to the state, specifically linked to things like education.

The group also recommended the governor allow some tourism attractions to reopen with safety rules and precautions by this upcoming holiday weekend. Several beach cities were surprised by huge crowds this past weekend and said the sun and sand wasn't enough to keep people occupied.

McMaster said he would make a decision soon.

Accelerate SC couldn't answer all the questions since the group was created April 20. What will public schools look like in the fall? How can South Carolina prepare for a possible second surge in cases later this year? And how can businesses convince people it is safe to come back to restaurants and attractions closed for nearly two months?

McMaster said the committee's actions should slow the virus, even after the summer, as long as their cleaning and safety recommendations are followed.

“If we follow those guidelines and are cognizant of what each of us have to do to stay safe, we should be in very good shape," McMaster said.

The virus, meanwhile, continues to impact the state. The University of South Carolina announced Tuesday that football coach Will Muschamp, woman's basketball coach Dawn Staley and men's basketball coach Frank Martin all agreed to a 10 percent pay cut for a year starting in July.

University president Bob Caslen, athletics director Ray Tanner and several other senior university employees also took a 10 percent cut, which should save about $1.2 million, the school said in a statement.

The university estimates it will lose $40 million through August with more losses possible even with plans to reopen campus and resume in-person classes . Travel and overtime have been curtailed, construction and raises have been delayed and furloughs are being considered, the university said.

There have been more than 9,050 cases of the coronavirus confirmed in South Carolina, and at least 399 deaths, according to an update Tuesday from the state Department of Health and Environmental Control.

Accelerate SC Executive Director James Burns will review the committee reports over the next week or so and produce a full report for the governor.

McMaster ended the meeting thanking the committee of about 30 for its work with words from a Carly Simon song.

“Nobody does it better. Makes me feel sad for the rest. Nobody does it half as good as you. Baby, you’re the best," McMaster said.

He did not sing.