Quieter Mayfield knows Year 3 vital for him after rough '19 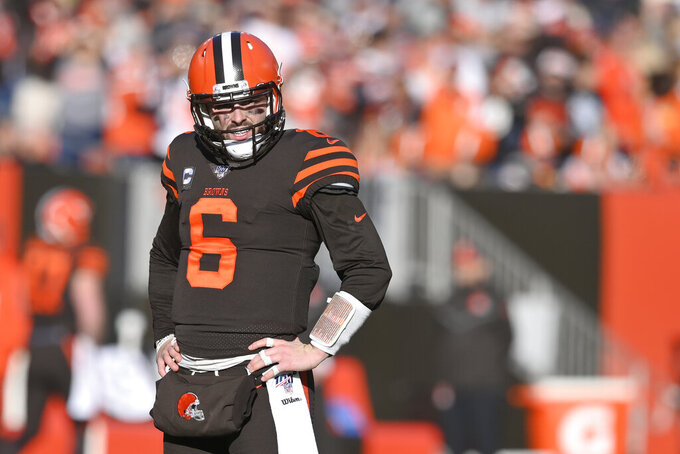 FILE - In this Dec. 22, 2019, file photo, Cleveland Browns quarterback Baker Mayfield reacts during an NFL football game against the Baltimore Ravens in Cleveland. The Browns quarterback said being away from football has given him time to reflect on his career and made him more determined to rebound from a tough second season in the NFL. Mayfield spoke Wednesday, May 27, 2020, on a Zoom call for the first time since the end of last season. (AP Photo/David Richard, File)

Baker Mayfield went back to his roots during this strange offseason, a time he's used to reflect and forget a season that didn't go well for the Browns' brash quarterback.

“I've always been a high-effort guy," he said. "I am swinging hard still, but it is still not going straight.”

Neither is his NFL career, and Mayfield's spent the past two months trying to get it back on the proverbial fairway.

After an electrifying rookie season, he regressed significantly with Cleveland. On Wednesday, Mayfield, who will be playing for his fourth coach in three years in 2020, spoke to reporters for the first time since January, when the Browns' 6-10 letdown was followed by yet another coaching change, front-office purge and renewed questions about whether he's a franchise QB.

“There’s no doubt Year 3 is always a big year in these contracts and timing-wise, everybody knows that,” Mayfield said on a Zoom call from his home in Texas, where he's been holed up during the COVID-19 pandemic. ”I’m not going to put any added pressure on myself. There’s no need for that. Because if I win, good things will happen. That’s the most important part.

“If I play better, that’s why quarterback is one of those positions that’s the hardest in sports. If I play better, our team’s going to do better. So I put that pressure on myself. So it doesn’t matter what year it is, I have to be way better each year.”

Mayfield was way worse in 2019 than 2018. He followed a record-setting rookie season by throwing 21 interceptions, completing just 59.4 percent of his passes, with a paltry 78.8 passer rating. He lacked confidence in the pocket, never got on the same page with star receiver Odell Beckham Jr., and had a handful of minor media meltdowns.

Nothing went as planned for him or the Browns, who fell flat on their collective face masks.

Mayfield is determined to learn from those mistakes. And, as he's done throughout his football life, prove people wrong.

To start, he's been noticeably low key. For him, that's a major change.

“I have a different approach this year,” he said. "Everybody who has been interviewed on our team has hit the nail on the head over and over about this is time to work. It is time to do our thing, instead of talking about it. This is the first media thing I have done, just because there is no need to be talking about it. It is just time to go do it and right now.

"It is moving in silence, which is fine with me. That is how I used to do it before getting on a bigger stage, so I am happy to get back to those roots, get back to the fundamentals to where I can accomplish the goals when the season comes around.”

Never one to mince words — on or off the field, — Mayfield feels time at home has given him perspective and a greater appreciation of his profession.

Circumstances have changed and so has he.

“You only get so many opportunities in this game that I have been blessed to play,” he said. “It does not last forever. To be able to take advantage of that and enjoy the moments, I think it is going to be good for me, getting back to that and having fun and enjoying the process of how to get to winning, because that is the most enjoyable thing looking back on it."

In addition to down time playing board games or boating with his wife, Emily, Mayfield has spent a major chunk of the past two months getting to know new Browns coach Kevin Stefanski, the former Minnesota offensive coordinator replacing Freddie Kitchens.

Mayfield is impressed with Stefanski, who recently moved his family to Ohio after being stuck in Minnesota when coronavirus changed normalcy and shut down pro sports.

“Kevin is obviously an extremely sharp guy,” Mayfield said. “He's able to relate to everybody. That is one of the best parts about him and being around him so far. Just hearing his message, everything he does is with a purpose."

Mayfield was able to implement some of Stefanski's new offense recently after he invited nine teammates, including backup quarterback Case Keenum and newly signed Pro Bowl tight end Austin Hooper, to join him in Texas for workouts.

“A lot of them were here last year, but it was good for everybody to be around, speaking the same terminology and just kind of hanging out during all this," he said. "You are kind of stuck at home, but we had a chance to get outside and throw a little bit.”