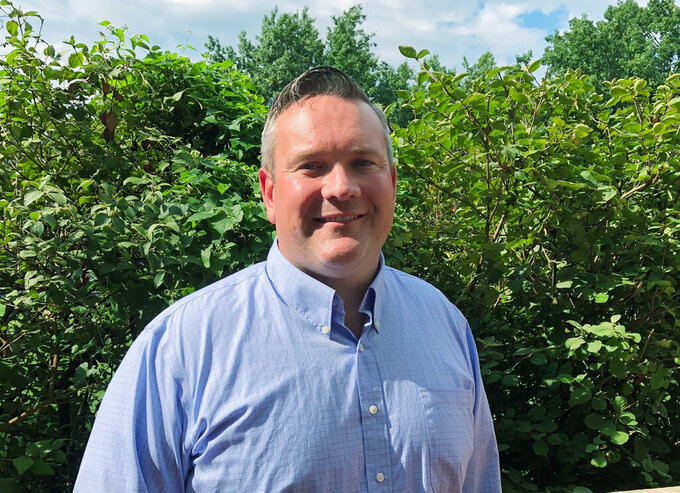 FILE - In this Tuesday, July 30, 2019, file photo, Democrat Josh Hicks poses for a photo in Frankfort, Ky. Kentucky's 6th District has lived up to its reputation as a political battleground with the current slugfest between Republican U.S. Rep. Andy Barr and Hicks.(AP Photo/Bruce Schreiner, File)

Republican President Donald Trump and Democratic former Vice President Joe Biden are at the top of the ballot in a state where the GOP has dominated federal elections for more than 20 years. That includes the last presidential election, when Trump carried Kentucky by 30 percentage points. The last Democrat to carry Kentucky was Bill Clinton in 1996. Neither candidate campaigned in Kentucky, instead focusing on swing states elsewhere.

One amendment known as Marsy’s law would add a series of crime victims’ rights to Kentucky’s Constitution. The measure was a reprise of a 2018 constitutional amendment that cleared the legislature and was approved by Kentucky voters, but was voided when the Kentucky Supreme Court ruled that the wording was too vague. It's worded differently this time, but would have similar effects. It guarantees, among other things, that crime victims have the right to timely notification of court proceedings. Another amendment would lengthen the terms of district judges and state prosecutors. It calls for district judges, who currently serve four-year terms, to start serving eight-year terms in 2022. It also increases the time they have to be a licensed attorney before becoming a judge. In addition, the amendment would add two years to the term of a commonwealth’s attorney.